Ungluing - The saga of the second table

I got so excited about how my first end table came out, I jumped into a second one with a design change: add a drawer.

But did I add a 4" drawer like Charlie suggested? No, I decided to "maximize" the drawer space, designing a 1x6 front. That makes a 1x8 blind on the side. This was going so well I "maximized" the lower shelf reduced the… Continue

Here is a trick I learned from Brian for cutting oak smoothly even with a coarse blade: 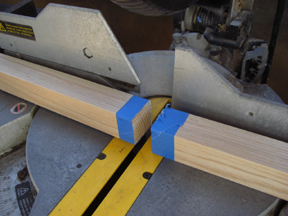 He wraps the wood in blue painter’s tape before cutting it.

(I am writing a tutorial about adding pictures and links, this is my sample blog entry for the… Continue

I started making the bird house tonight and I bought/used Gorilla Glue on it.

The Gorilla Glue was so slick that the Kreg right-angle clamp couldn't hold.

What glues do you all like? Should I have stuck with Tightbond?

I've had a zero clearance insert sitting around my shop forever (a few years anyway) that I never go installed into my table saw. While working on the raised drawer fronts it became quickly apparent that I was going to have to do SOMETHING to keep the short end of the small drawers from falling into the blade opening of my standard insert while they were being cut, so I finally bit the bullet and figured out how to get the inset put in:… 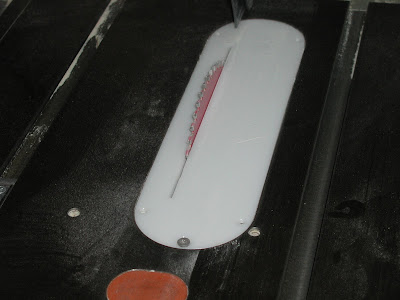 We have a nondescript fireplace in our living room. Over the years, I've been trying to do something with it. I've tried adding a mantel which worked for awhile, but still lacked the pop I was looking for. My wife is into the whole Craftsman/Mission/Arts and Crafts (what is the difference anyway???) style so I started to Sketch-Up something for the fireplace.

This is the 2nd iteration of the fireplace mantel. Still lacked that special something I was looking for.…
Continue

just bought a Kreg face clamp @ Lowes. Brought it home and was disappointed that there was no quick relese lever. I didn't even look while I was at the store. I just looked for the Kreg name. Are all there clamps like this, or did I just pick the wrong one?

I just started building a shoe rack yesterday for my wife. I am only using pocket hole joinery (and glue), nothing else.

Here is a link with all the details, including a materials list and a cut list, etc. I needed almost an entire box of 100 1.25"-course thread screws:

FINALLY, I'm starting to work on the next stage of the built in project. Spent several hours in the shop Sunday (no football for me) making up panels for the drawer fronts and cutting them down to final size. 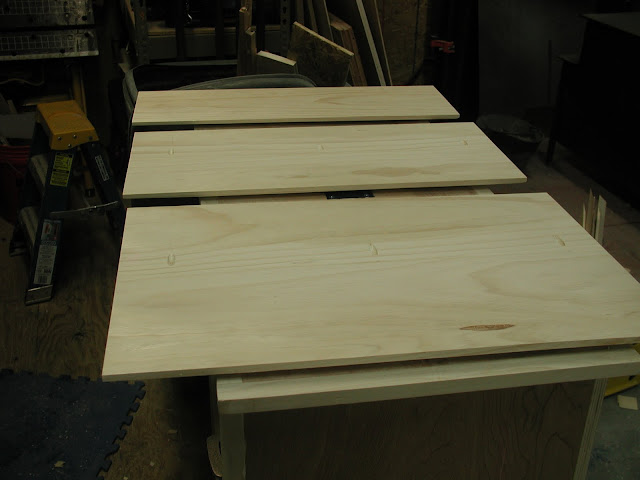 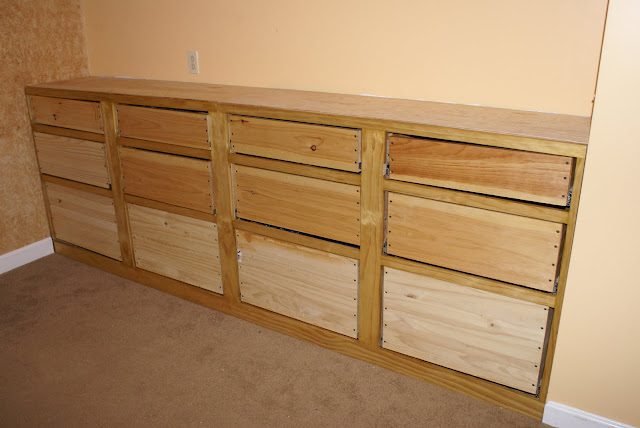 My brother Dan can get a little bored at work, and yesterday was no exception. He sent me an email in the morning saying he visited craigslist.com and came across this band saw. It's a vintage 1953 Craftsman band saw being sold in Burnsville for $110. He sent me pics of it and said it was in FINE condition. I called the guy and sure enough, it was still for sale. I told him I'd be by after work.

It's a good thing I work in Burnsville because this guy was basically in my back yard.… Continue 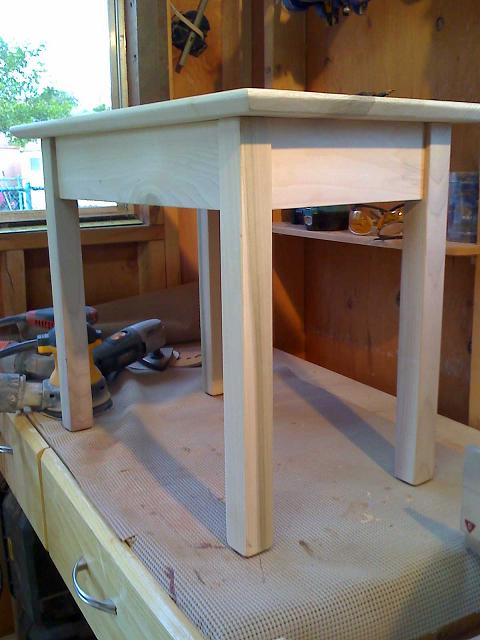 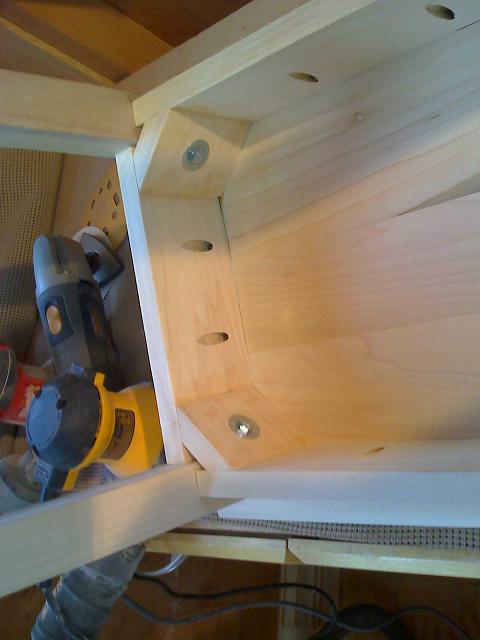 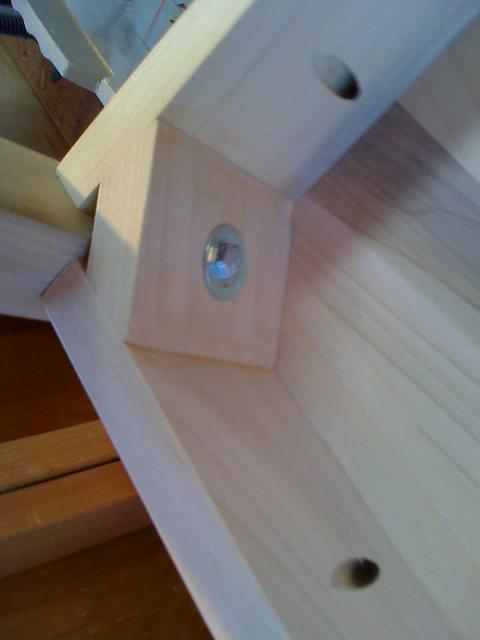 This is a little project I have been working on the past few days that I just finished. It is a nice little end table. As you can tell I like more of the simple Shaker style furniture. It was fairly challenging, but it was a very relaxing project and very fun to make.… 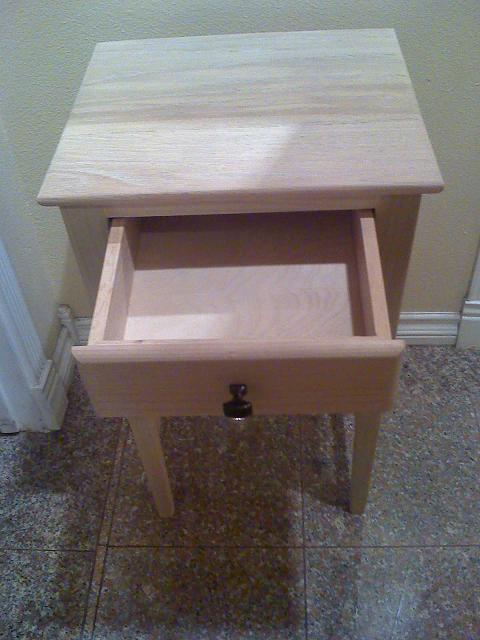 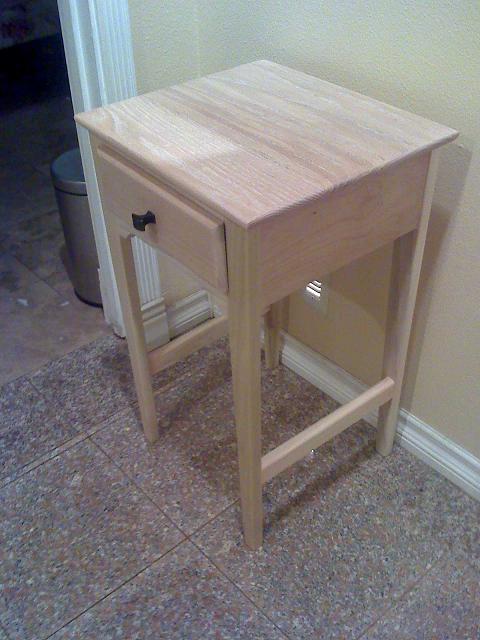 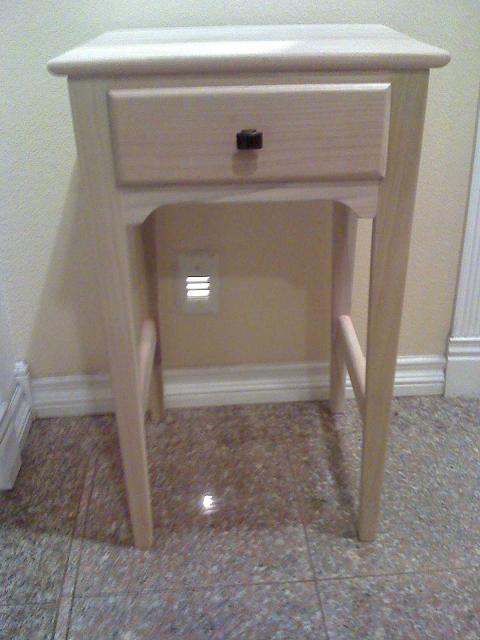 Project that I did. It is a Queen Ann's table. I steam bent the oak radius apron. It was a quarter inch oak three ply with a jig that I made. It was challenging because it was my first time bending wood, but it was a lot of fun. I went on youtube and watched some videos on bending wood. From there I made my jig and put the wood in my steam sauna for about an hour and a half and went in and wrapped it around my jig. All the materials I bought at Lowe's the top is poplar, the apron is red oak,… Continue

I got my Kreg Jr for Christmas from my wife. There are some pieces of furniture that she is wanting me to build.

In the latest Family Handyman Magazine there is a closet storage solution that we really liked.

Our master closet has basic shelves and rods in it currently. We would like to make better use of the closet space.

here is my modified version of the closet storage system.…
Continue

Has anyone ever been in a project which has tight spaces, one where you can get the cordless into, other than a regular hand held driver what might be used, i am planning on doing some bird houses , some plain jane ones and others with a little bit more ginger bread but it looks like i wont be able to get inside to set the screws.THANX for time I play Native American style flutes and recently have learned to make and play cigar box guitars. I needed to make some displays for both types of instrumente. That's where the Kreg Jig came to my rescue. It made the build fun, and fast. "W.T."… 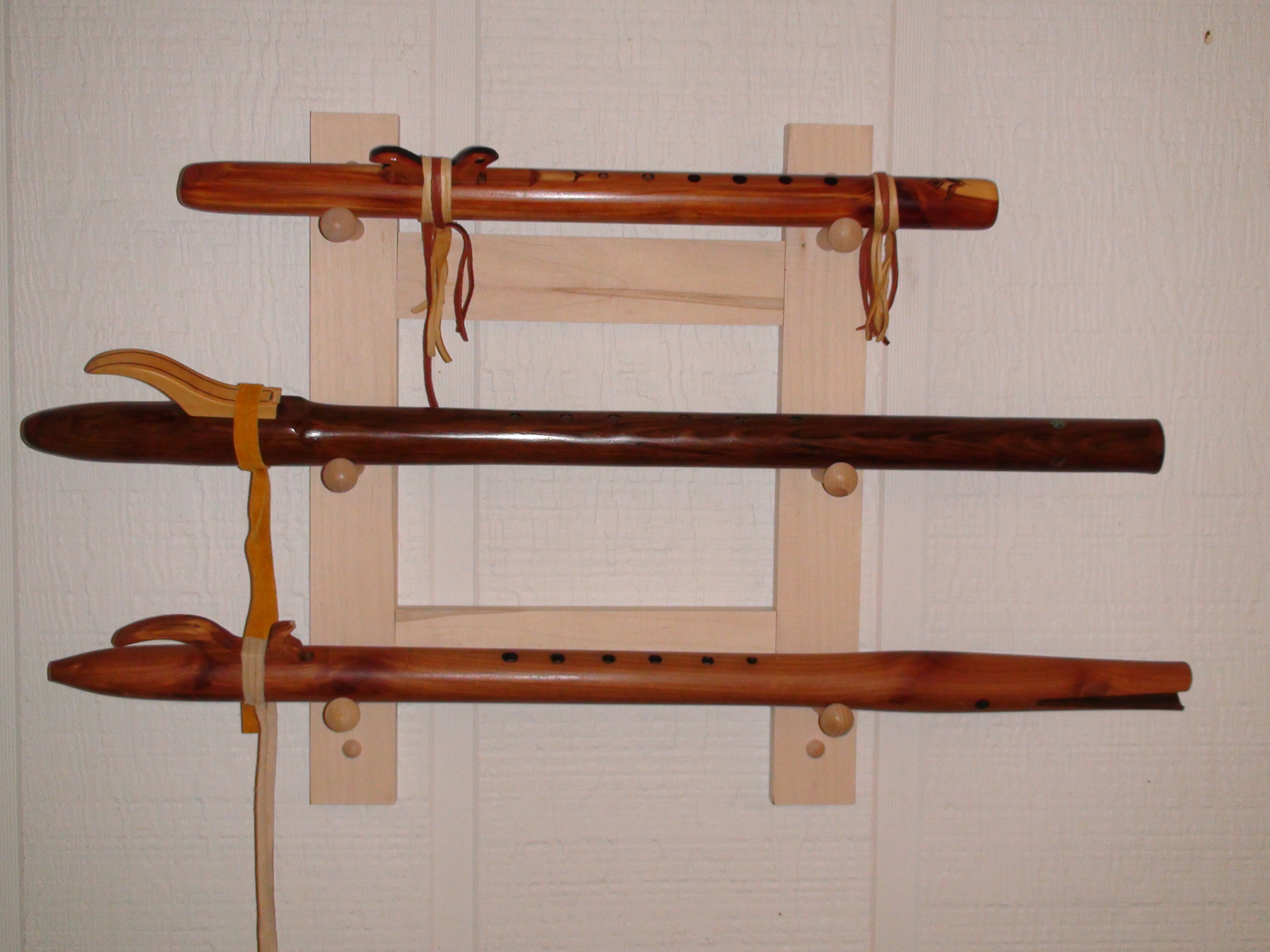 Over the recent holiday break I got out my hand dandy Kreg Jig and built 16 linear feet of tool storage cabinets for my workshop's "Tool Crib".

Here are the base units. Notice the pocket holes in the drawers; 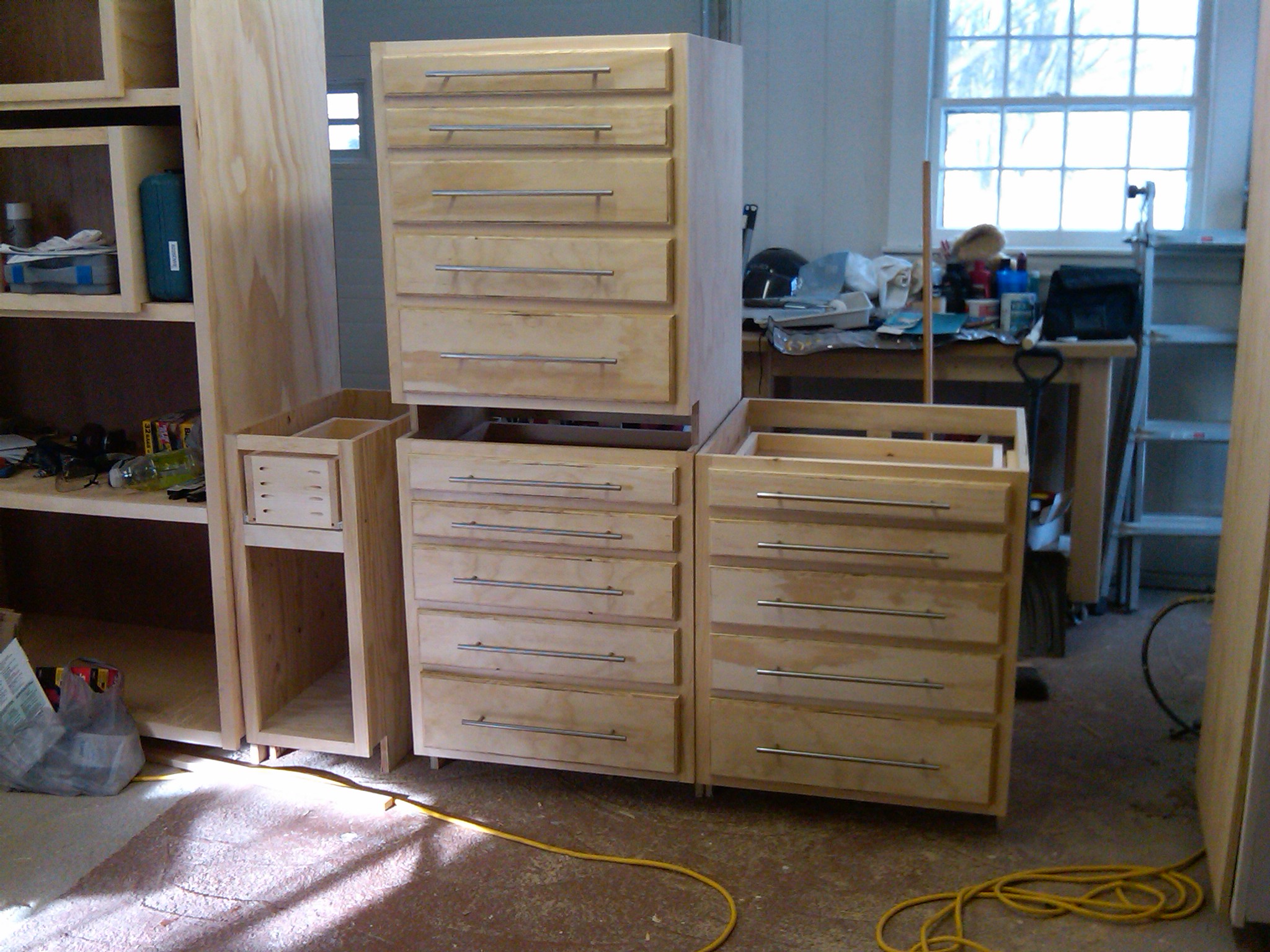 Here are the upper units; 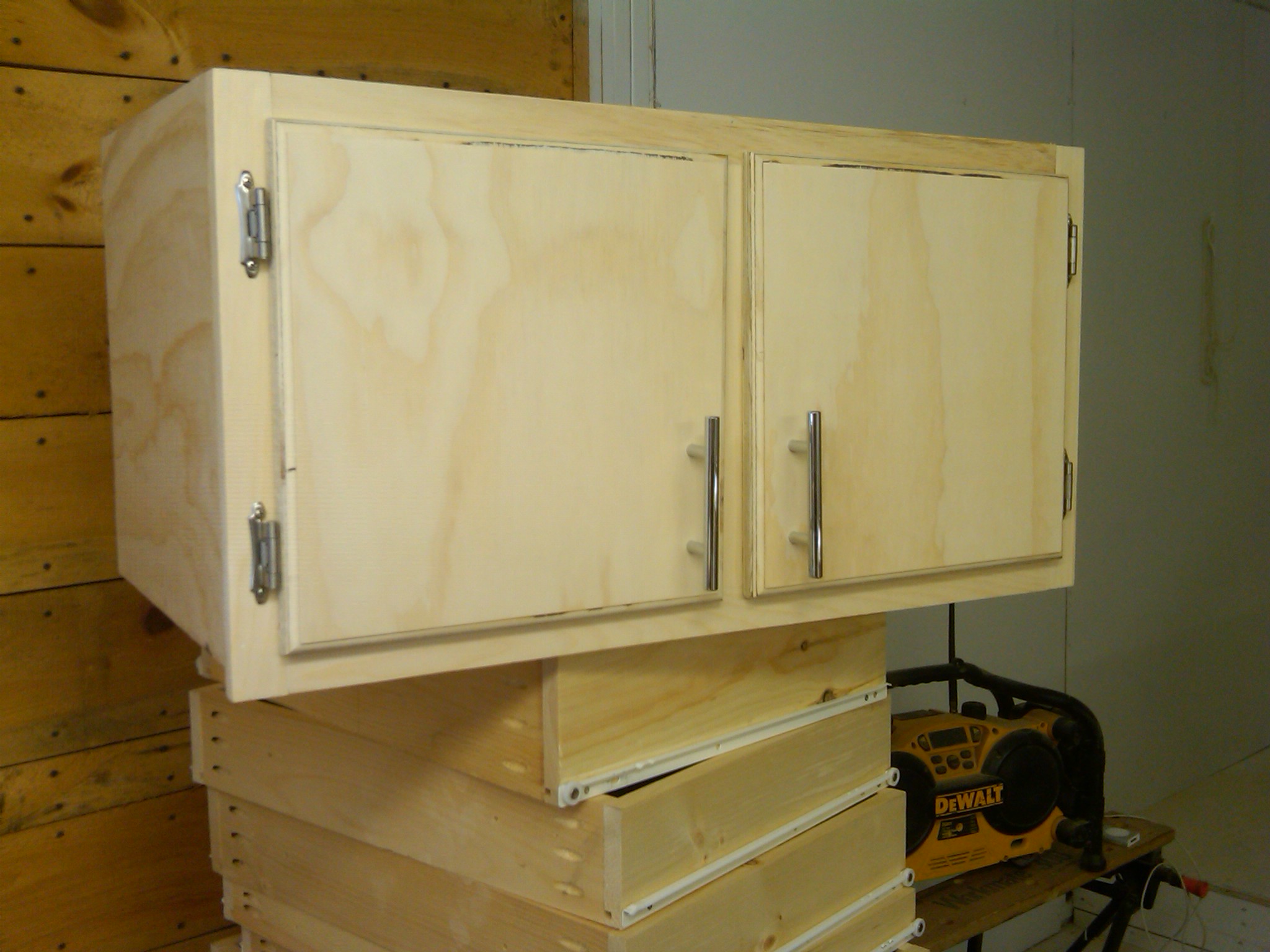 Here are the units painted and installed looking down the room to the left. Notice the pocket holes up under the… Continue

Has anyone built a stand up desk and will they share their photos/plans. I just got my jig and would like to build one.

It was Christmas of last year when I was at my brother’s house celebrating with family. We were all sitting around watching the kids open their gifts. Near me was a rocking horse that my dad built for our youngest niece, Charli. I took the opportunity to examine how he made it, and what all went into it. My dad didn’t use the Kreg Jig for his rocking horse, so when I was looking at it, I was contemplating how I’d change it up to allow for pocket holes. I decided I wanted to try and build one of… Continue

I built a simple bookshelf style cabinet for my entertainment center and faced it off with 1x2 (.75x1.5) oak. Long story short, using the correct 3/4" depth setting and 1-1/4" fine thread screws, I cracked nearly all the joints, or the screw came out the side of the oak.

What did I do wrong?