It was way back in February when I was at the house of the newly married couple I gave the hope chest to as a wedding gift. Everyone was partying pretty well and occasionally admiring the chest sitting in the living room. One of the guests, Heather, was paying particular attention to it and said, "Badger," my paintball callsign by the way, "when are you going to make me something?"

You have to know that Rick and Heather have done SOOO much for me over the years that of course I'd make them something. It was simply their turn. I wanted to do something I'd never done before. She would have been happy with another hope chest, but those were becoming commonplace with me. I wanted something awe inspiring.

That's when Kristina and Odin (the people who got my Viking cradle and rocking horse) gave me a stack of old woodworking magazines. They said I could keep them and maybe get some ideas out of them. I perused them thinking, "Nah, nope, not my style, too complicated, etc..." Then I saw it.

On the cover of Wood Magazine's August 1992 issue was a picture of a pie safe. I scanned the cover of the magazine so you can get a good idea: 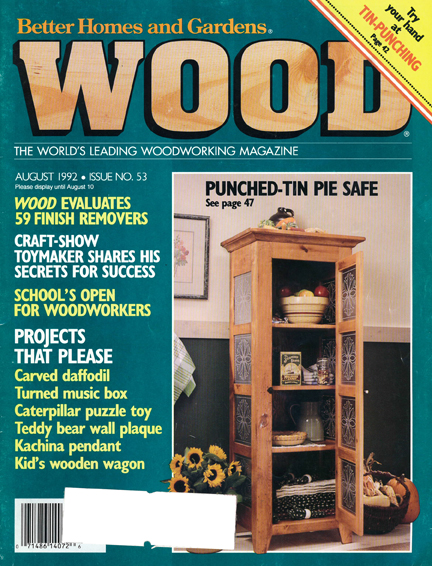 I stopped tossing magazines and said, "that's it! That's what I'll make those guys as a thank you present." So, off to Menards I went, looking for pine planks and galvanized aluminum. I got home and studied up on the process of tin punching. As it turns out, it's nowhere near as hard as you might think. The trick is to dream up a design, or choose one from the magazine. Print out enough copies for each panel, and tape the sheet to the cut-down size of sheet aluminum.

Once taped into place, take a metal punch and a hammer and tap each dot on the pattern twice. You can do more taps if you want to punch all the way through the metal for a true pie safe. I asked my dad about this, and he told me that unless you want your door and sides to become deadly cheese graters, just double-tap each dot and create the pattern in the metal. I decided to go that route. 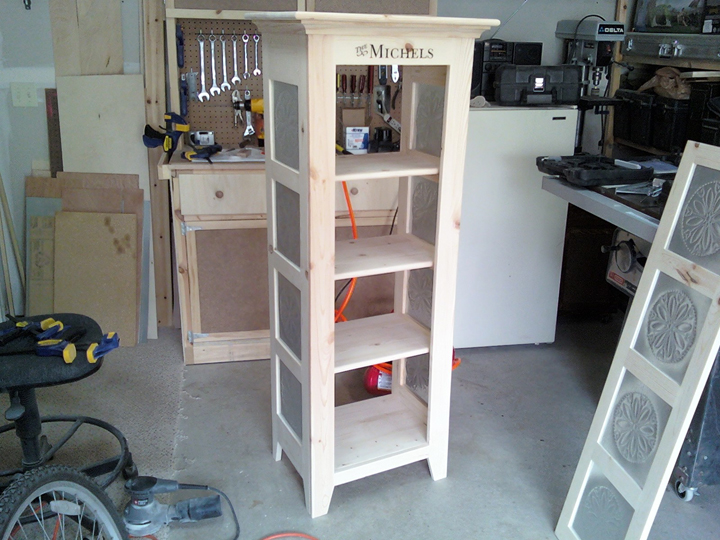 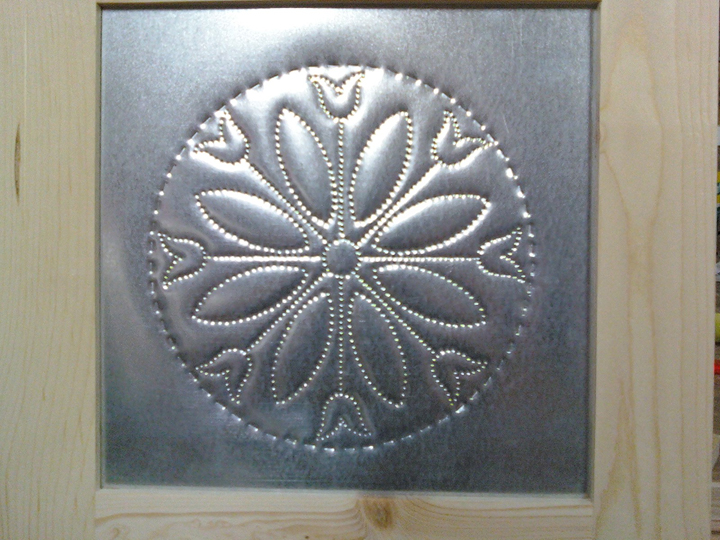 I put that process aside as I created the wood framing of the pie safe. The result is a "phone booth-looking" structure that needs the metal punched plates to finish them off. I'd offer up plans, but they are pretty complex. If you want to build your own, I suppose I could scan and display the article later, noting Wood Magazine where needed. At any rate, once I had the skeleton ready, it was time to tin-punch...

...12 times over. This process will kill your shoulders, so please don't think you're going to quickly turn out that many panels overnight. There is a suggestion that all you have to do is panels for the door, but I think it looks better if you do it like the magazine's cover. Each night I would punch out a panel while watching a movie. However, I needed to concentrate on what I was doing while watching a war flick. As my dad warned me, there is no going back and fixing your mistakes. If you punch where you're not supposed to, you can't undo it.

Once the panels were done, then my next issue was routing out the back sides of the door and side panels to accept the tin sheets like a picture frame. The magazine calls for a chisel set and have you square off your routing. I said screw that, I'll just leave them rounded and make angled cuts to my back pieces to frame in the tin-pounched panels. I knew that it would leave crescent holes behind, but I would then go back and fill them in with Minwax Wood Filler. The result was very unnoticeable. I sanded the door and panels flat after using finishing nails to secure the panels.

After all that was finished, I assembled the pie safe without the back panel. I figured it would become very difficult to get inside it and sand, stain, and finish, so I did all that without a back panel. That would be secured afterwards. To keep the stain off the aluminum during that stage, I had to painstakingly apply two coats of wide masking tape to each panel, both sides. I could have gotten away with one application, perhaps, but thought I better be safe than sorry.

Once they were all taped up, I created a flail using lengths of chain attached to an eye hook screwed into a wooden dowel. This flail allowed me to distress the wood and make it look antique. Remember, too little doesn't do the project justice, and too much makes it look like it was over-abused throughout the ages. Use your best judgement when distressing wood. When you get good at it, it looks amazing when you stain the piece, and is a great way to hide any mistakes. Another good tip is to take a sharp wood screw and put some scratches in the wood, but not just haphazardly. I scraped the wood in places that seemed likely to have a scratch after use. Imagine what this piece would go through over time in someone's home. Where would the most likely places be for scratches. It helps sell the idea it's an antique.

I then got out the Minwax Golden Oak stain and applied it everywhere. Instantly the project looked like an antique when I smeared the stain over the indents. I let it dry, and then went back and lightly sanded before adding polyeurothane finish. Two coats later and it was time to attach the back piece. 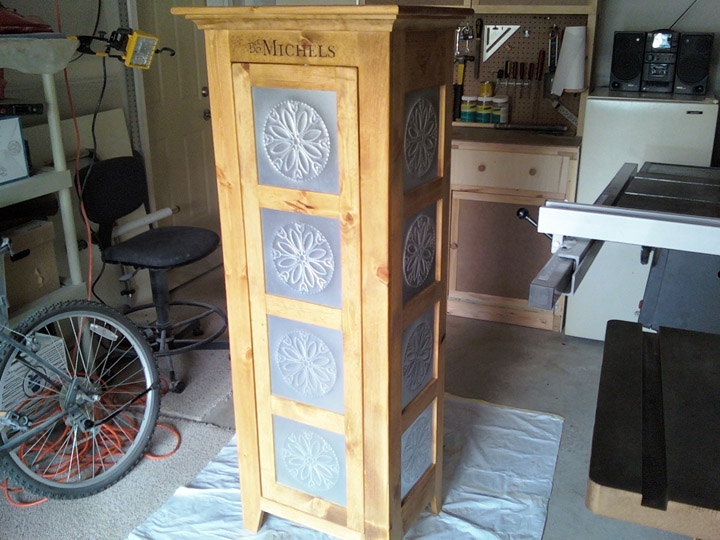 Finally, I added the hardware. I looked at both Menards and Home Depot, but they don't have any cool-looking latches, so I traveled over to a Rockler. Well, they didn't have what I needed either. I ended up going online to a website called VanDykes.com They had just the thing. I ordered one black powder-coated latch and waited. I hate waiting. I'd much rather buy at a store, but I was in a pinch and it had to look just right. Good thing VanDykes' delivery is FAST. Three days later I'm attaching the hardware.

When it was all done, I loaded up the pie safe and drove it over to Rick and Heather's house on Mothers' Day. They knew I was making something for them, but didn't know what. I would release hints, but nothing that would really give it away. You guys got to see photos beforehand, but I even had to ask KregTool to keep it off of Facebook, since both of them are Facebook users. Thanks Kreg Rep!

I arrived and found Rick out in the garage. He was amazed at the pie safe, so he helped me haul it inside and set it down. We demanded that Heather keep her eyes closed until I told her to open them. When she did, she was speechless! I got hug after hug over it, and thanked about 10 million times. The thing of it is, they have done so much for me, I practically owe them about SIX pie safes to make up for all of their generosity! P.S. One last shot up close of the distressing of the wood. I added this heart as a bit of flair to give it some more character. 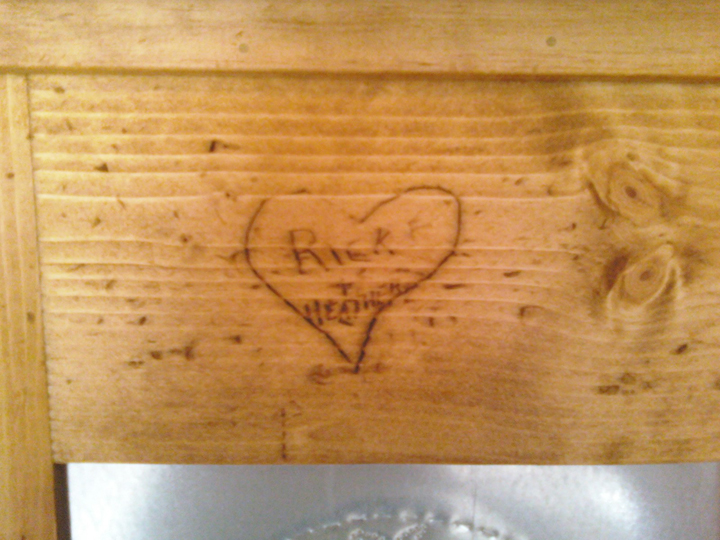 Another successful project completed. Now it's on to my next woodworking project...

Comment by Adam Adolph on June 12, 2010 at 9:02pm
I love this. I need to build one of thesefor my wife. Awesome pie safe. Love all the detail in your descrition too.

Comment by David McCarver on May 20, 2010 at 6:06am
You have done a really nice job on the project. Anyone would be proud to have it for his own.
Something you might think about for your next project is to use a tenon joint for the doors. They are invisible both inside and out and will last for decades. I am a great fan of pocket hole screws but they are not a do everything joint. Rails and stiles on any type of inserted panel door require a pretty substantial joint if expected to hold up over time. Again - congratulations on a very nice project. Dave

Comment by Don Grubish on May 13, 2010 at 10:01pm
Thank you, guys. I just got done reading all of the comments from the knock-offwood.com site. That was pretty cool, I must say!

Comment by Kim C on May 13, 2010 at 9:06am
Wonderful story Don! You were right about being blown away once we saw your project! It is awesome! What a treasure to have. I know a lot of love went into those tin punch panels. I used to do it for my mom when I was in high school. She owned a craft store and that's what I did after school. I feel your shoulder pain!!!
Great project! Great job!

Comment by KregRep on May 13, 2010 at 8:03am
Thanks for the great post, Don! A very inspirational project, did you see all of the high-praise it got over on the Kreg JIg giveaway! Easily the most 'liked' project there. http://www.knock-offwood.com/2010/05/bragging-board-things-you-coul...

Comment by Derek on May 12, 2010 at 8:30am
I always enjoy reading your thorough project descriptions, Don. It's great to hear the actual STORY behind the project and not just see the photos. I always feel like I was right there with you at the high points and the low points of the project! Thanks again for sharing, anxious to see what your next project is!

Started by Jon J Howard in Beginners' Zone 17 hours ago.