When it comes to using something to help with keeping cross cuts and rips straight, what do you prefer to use and why?

Or a homemade plywood/straightedge jig

This is assuming you would be using a circular saw or jig saw and do not own a table saw.

Permalink Reply by Rick on March 24, 2014 at 9:22am
Ken,
It's also a design issue. The pivots on my base are so flimsy, that they cannot be calibrated with certainty. Adjustment must be made with a hammer or a pry bar.
Good enough for house framing, but not for house cabinets.

Or a homemade plywood/straightedge jig"

Only difference I can see in the first 3 is the color. The obvious advantage of the last one is initial cost. I have a Harbor Freight that I like because the Peachtree and Rockler clamps I have don't always have enough motor clearance on deeper cuts where the Harbor Freight has a lower profile.

As has been pointed out, those guides are as good as your saw. I have an old Milwaukee drop foot (no pivot points) that is dead on. I don't think they make that saw anymore, go figure. The down side to the saw is that it doesn't work well with the Eureka track system so I picked up a Makita track system. I was going to spring for the Feestool but at the time, the Feestool were under a recall, and sales of the TS55 had been suspended. No matter, I'm more than satisfied with the Makita.

Here's my 3rd generation 96in long "shooter board" for my Makita circular saw.  Note how thin it is -- the thicker it is, the less it can cut your work.  Note how wide it is -- you want the motor housing to clear the clamp on the left side, and being wider makes it stiffer.  I also glued it up to be slightly concave over the length, that way the center presses against my work as the two ends are clamped.

The cost was free.  I used leftovers of that good 1/4in underlayment (with X's all over as targets for stapling) from Lowe's for vinyl flooring, and glued the pieces together.  The only critical part of assembly is that the saw base right side guide edge must be perfectly straight (1/32" or less) over the entire length.  The bottom guide is left oversized and is trimmed after assembly. 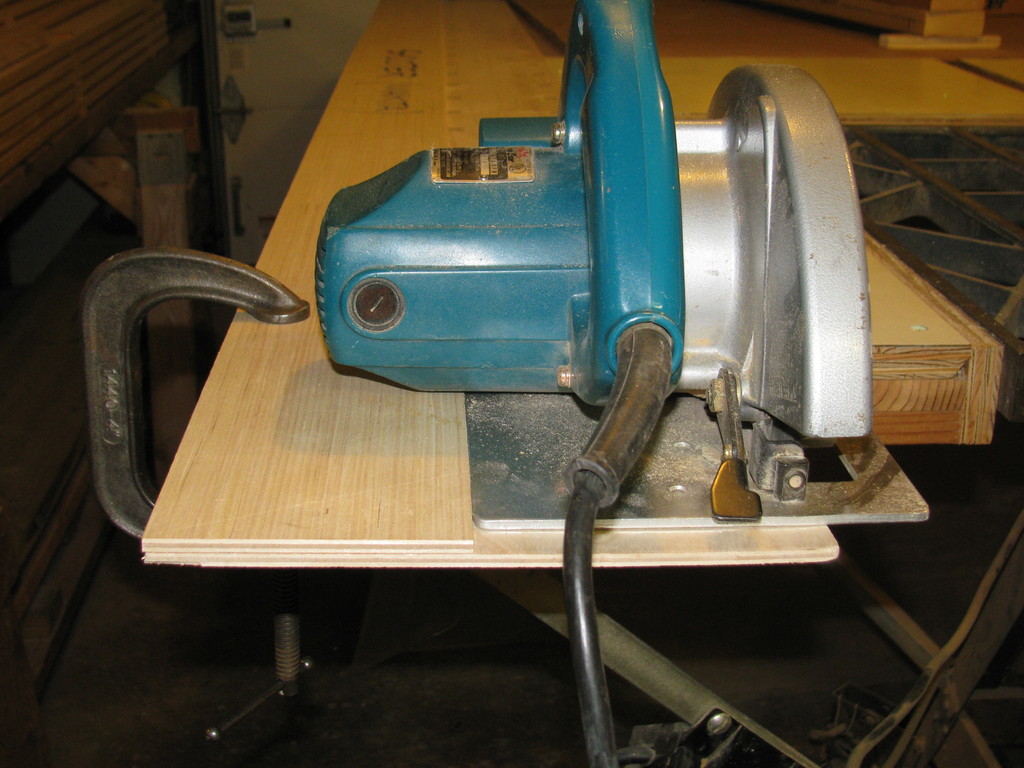 Permalink Reply by Zachary on March 24, 2014 at 8:12pm
A cool trick I use on my straight edge is spray glue the non slip pad you use under a rug for hard wood floors. Doesn't slip no need for clamps.

The saws, I made reference to in my previous post,

contained a HD thick base ---

the rear pivots are of a thick cross-section---

the forward pivots and clamping were substantially sturdy---

Much more rugged construction over the less expensive saws.

Thus the reason for my selection of the saws.

(These are HD construction rated saws).

Upon evaluation of the saw blade alignment, it was concluded the front and read "pivot" were not aligned.

The pivots were not flimzy, they couldn't be adjusted using a hammer and pry-bar.

The forward mounting base holes, would have to be relocated, so as ot align the pivots.

(I discussed this matter with another person, who had experienced the same issues, and he had his saw reworked by a machinist.  He had access to a well equipped machine shop).

Ken,
It's also a design issue. The pivots on my base are so flimsy, that they cannot be calibrated with certainty. Adjustment must be made with a hammer or a pry bar.
Good enough for house framing, but not for house cabinets.

At the time I bought it, the Makita was one of the nicest circular saws available.  It went up against the Milwaukee -- which was heavier, but had the "drop-foot" design, which explains why it remained "dead-on" as John S. notes.  It's still a great saw, but it was designed for durability and not accuracy.

In those days, I never heard of Festool or track saws, which shows how the industry has changed.  Now whenever I watch shows like This Old House, that's all they use is Festool any more.  They are the leader, and others are now copying them -- e.g. track saws, stackable containers, brushless motors, etc.

Either I got lucky or the cheap bosh at Lowes is still a good saw mine is dead on with an edge guide. Think I paid $59. You might try that saw or there is write up about the grizzly tracksaw works well by doing a couple of things shorting the spring because the tensioning is to tight. The other thing was on the track there are two support strips that support the saw and on the grizzly they mounted near the middle of the track. If you carefully temove the strips and move them to the outside edge of the track the saw is stable and works properly. If i get chance I'll find the you tube link.

Here is the link Your talking about a tracksaw with 8 ft capacity for $300.

Thanks for the info, Gary.

Problems will be solved as soon as Kreg introduces a "track saw".

Hi all....Has anyone have experience using a Kreg circular saw track guide system for ripping long boards??? The boards would be 5 to 6 inches wide by 6 feet, I have a Bosch 4100 portable table saw. But ripping boards that length with a 45% angle…Continue

Started by Ed Anderson in Other Kreg® Products Oct 6.