Not long ago, a Facebook friend of mine let me know that she was going to organize a silent auction fundraiser dinner for the St. Paul Winter Carnival. She's an active Royal Guard member, and takes her role seriously. During this last summer, the Royal Guard and the Vulcans decided to have two paintball matchups. The word went out and they tried to recruit as many paintball players as possible.

Well, on both occasions, I couldn't make the events. I felt bad, leaving her to deal with those advancing Vulcans on their base. So when the word came out that she was putting together this fundraising dinner/auction, I felt I had to pay her back, so to speak. I asked her what she would accept as donated items for auction. She replied that most anything would be acceptable.

I offered up my woodworking skills, and told her I'd love to make a chest for the event. While I didn't want to make such a huge chest like that last one for the wedding couple, I thought perhaps a chest only 2/3 scale would suffice. I ended up making a chest that measured 24" x 12" x 14" high.

I asked this woman what she would like woodburned onto the side, and she asked if "St. Paul Winter Carnival - Order of the Royal Guard" would be OK. I typeset the words into the computer and soon had my printout guide to woodburn. The results below are what I ended up with for her. She's seen the pics, but has not yet seen the real thing. However, she's more than thrilled with the outcome. I hope I helped make her cause a lot of money. 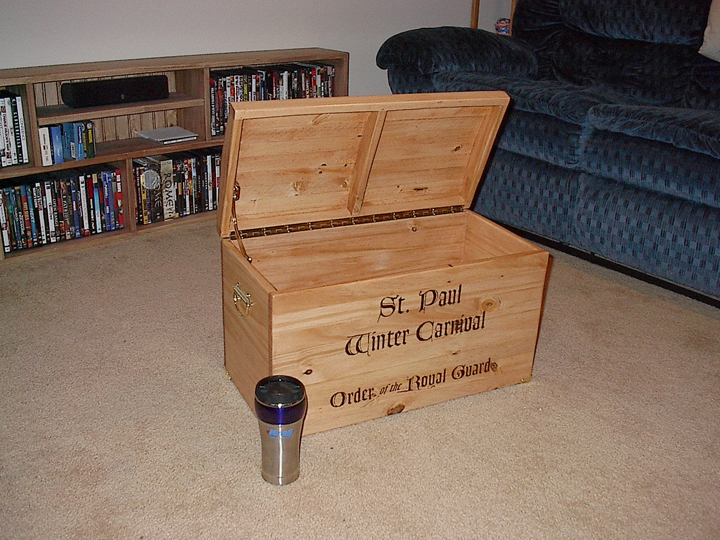 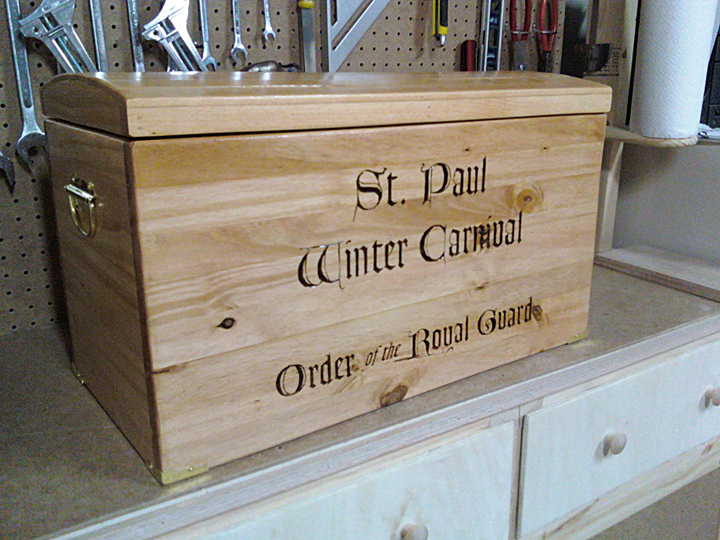 Comment by Don Grubish on October 16, 2009 at 7:07am
Thank you! Just yesterday I handed it off to a Winter Carnival representative. He was so impressed I had made it, he said that even he will put in a bid on it.

You're right on that, too. Just last February I didn't own hardly any woodworking tools, and it never occured to me to pick up this hobby. The Kreg Jig exploded onto the scene for me in that infomercial, and now my garage is just about full with power tools, hand tools, wood scraps for other projects, and a healthy coating of sanding dust everywhere! LOL I think my next investment will have to be a vaccuum system.

I'm thinking my next project might have to be a hall tree befor the holiday season. That way, I will have places for the extra coats when guests arrive.

Comment by KregRep on October 16, 2009 at 6:59am
The chest turned out beautifully, as always, Don. Who would have known that only a few short months ago you had never done any woodworking at all! I'm proud that the Kreg Jig could play such an important role in getting you started with this new hobby! Well done.