Remember a while back when I made that Treasure Box for my roommate's daughter? That was a precursor for a hope chest I wanted to build for friends of mine getting married on Labor Day weekend. Well, that day is almost here. This Friday, in fact. I'm almost done with my project, but here's how it all started.

My brother Dan used to build these things as toy boxes for our nieces when they were turning one year old. Dan used a dovetail joiner to make his sides and lid frame. While I don't have one of those expensive jigs, I do possess a Kreg Jig. I went back to my favorite Menard's and picked up more of those pressed knotty pine planks you can get near the lumber section. I grabbed three 18 x 36 pieces for the bottom and long sides. I also picked up a 24 x 36 piece for the short sides and lid frame. 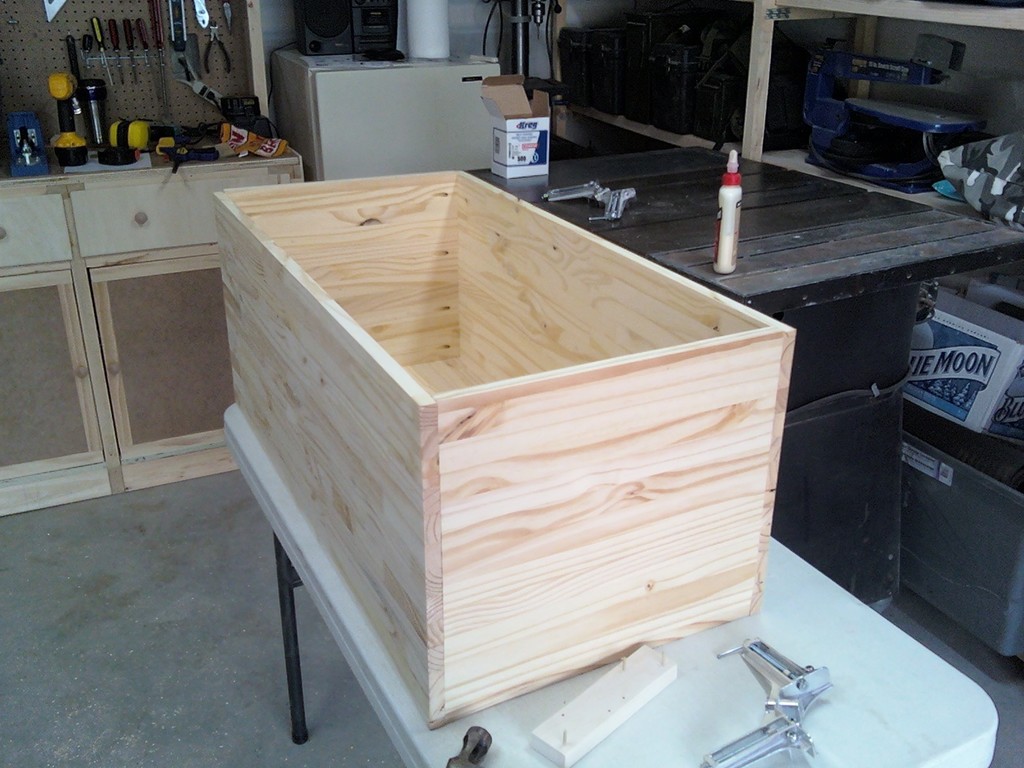 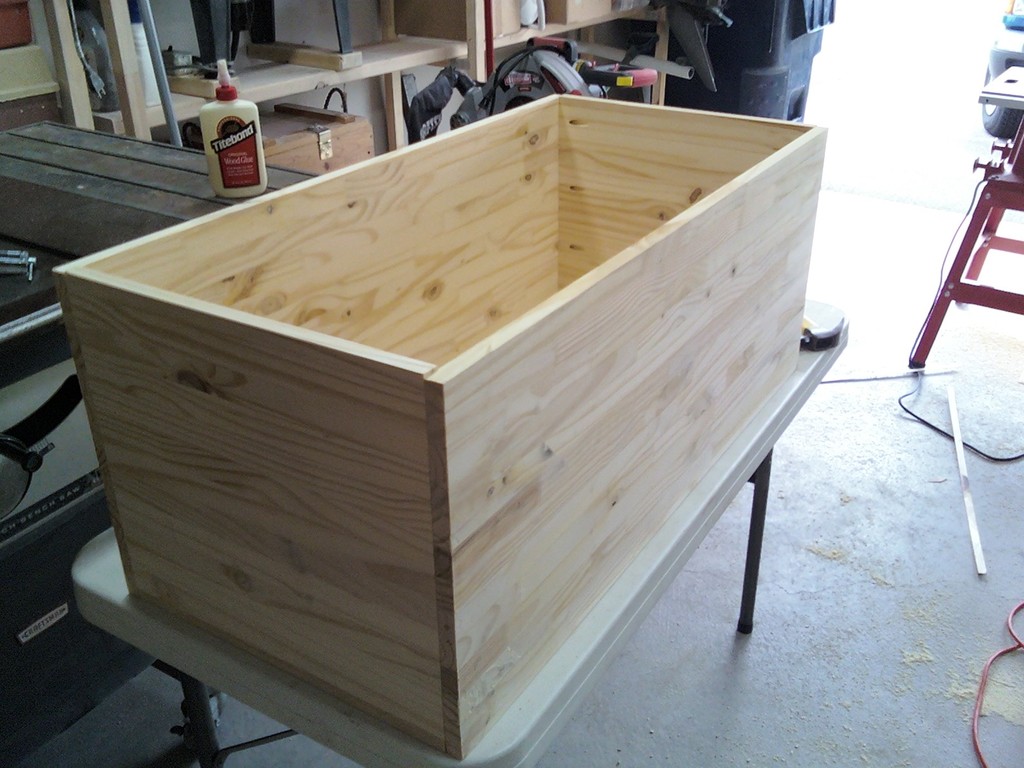 I called Dan from the store and asked him how exactly he made the curved top. I knew he made patterns for the curved sides, but how did he make the slats for the top? Turns out he had me buy 8-foot sections of beadboard which are roughly 3/8" thick. He told me to run them through the table saw to cut off the tongue and grooves, and then run them through again to cut 1" wide strips. Once I had those, I cut them to 36" lengths and set them aside.

I cut my curved sides to the lid using my template, and then clamped them all together in order to sand them to the same curvature. Thank God for Irwin clamps. That really helped make the job go quicker. I figured out that the curve, once at the ends where they meet the front and back pieces, was roughly 22 degrees. I set my table saw to 22 degrees and shaved off the angle, so that when they were fastened to the curves, the angle would continue for the slats. The images below might give more detail to what I'm trying to say. 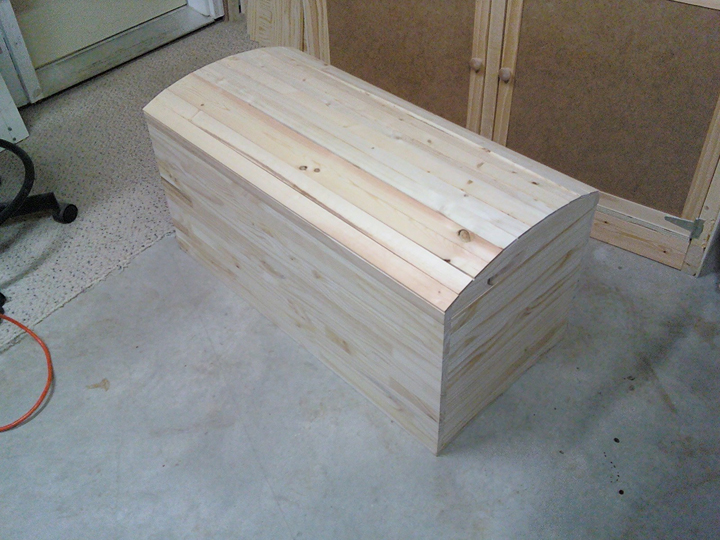 In those two photos, I simply laid the slats down on top to give myself a vision of what the chest will eventually look like when finished. With knotty pine, you're going to experience warpage with such thin strips, but some wood glue and finishing nails later, they will straighten out enough.

My next step, after giving the box and lid a good sanding, was to woodburn in the happy couple's new married name and their wedding date. It's good that I'm a graphic designer/art director, because I'm privy to a lot of cool fonts and a GREAT printer at work. I was able to typeset the information in, give it a good font, and print out to size what I needed for the woodburning. I took that sheet home and rubbed charcoal on the back of the paper. I then placed the paper down on the front of the box and taped it into place. After that, I carefully took a good hard pencil and traced all the letters. The charcoal transferred my tracing right onto the wood.

Now, I had a great map of what to woodburn, and what to leave alone. I heated up my trusty woodburner and began my task. 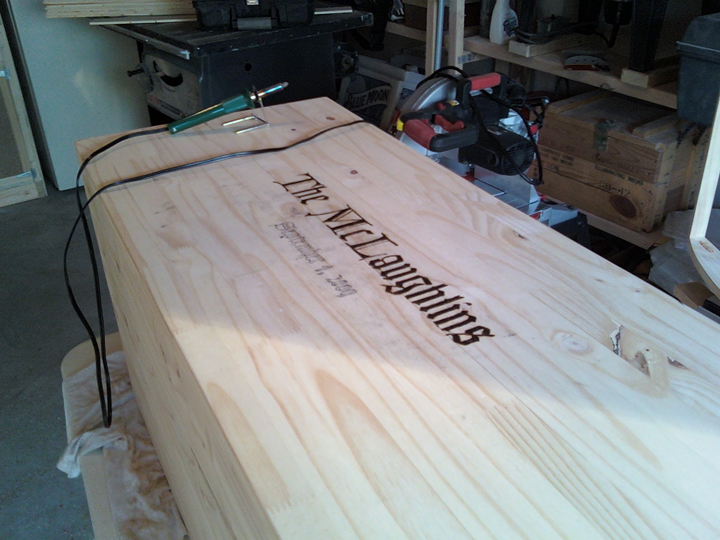 It was a pain, to be honest, but I really enjoyed the outcome. I believe adding woodBURNING to woodWORKING gives my pieces a personal flair you can't find anywhere else. I also get to sign my pieces by woodburning in my initials later.

I sanded the box and lid again until they were baby skin-smooth and made sure to round all my edges. My dad once told me that no one wants to feel sharp corners on furniture and the like, so I took his advice and sanded away any sharp corners and points. I also asked my brother Dan about "antiquing." He said all I had to do was toss in a handful of screws and bolts inside a thick plastic bag (I used a ziplock freezer bag) and begin beating the sides and top of the chest. It might sound like sacrilege to "damage" your piece, but bear with me.

Once done, I gave the pieces two coats of Minwax oil-based Ipswitch Pine stain. The dents and scratches that I gave the piece came out to look like wear and tear you might find on an antique furniture piece. It was an amazing transformation and added character to this chest. 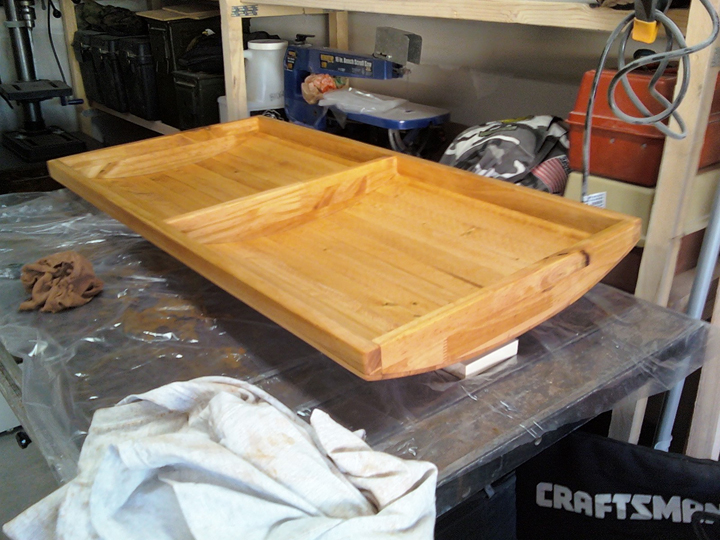 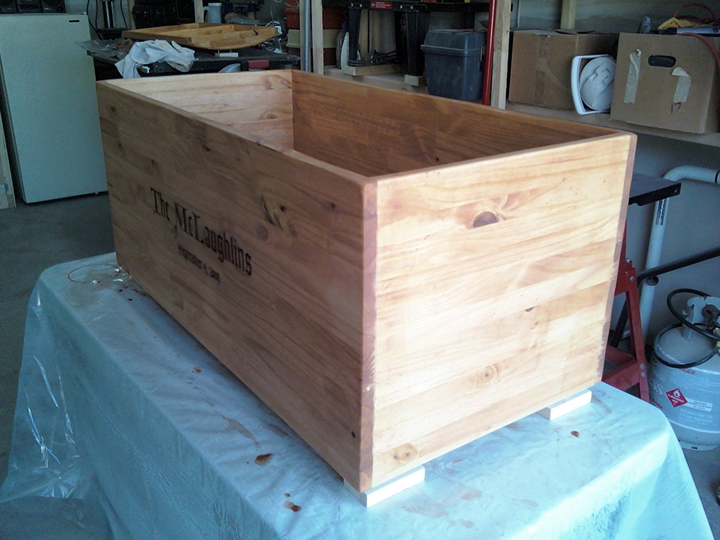 It's tough to see the antiquing from these shots, but trust me, I was blown away on how cool that looks. It's also a nice way to purposely hide any mistakes you might have made. Hee hee hee... I'm at the point now of adding a second coat of finish to it, and tomorrow night I'll add a third coat. Thursday night I'll attach all the brass hardware and take final shots. I was just so excited to tell all of you about this, I couldn't wait any longer.

I know Kreg Jig is set up with Facebook, but if you guys wouldn't mind, hold off on adding a link from here to there. Both the bride and groom are on Facebook, and I'd hate to spoil the surprise before Friday. Thanks in advance.

I'll write more when it's completely done, and come back to post a picture of my plans. I've had requests in the past about plans, so I'll be sure to include them too. 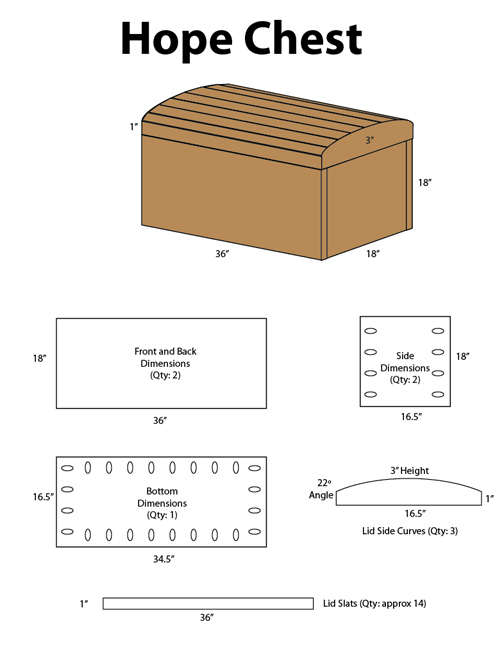 As I stated in a comment below, The wedding has come and gone, and the newlyweds LOVED the chest. The bride cried when she heard that I actually made it for her. That was my mission, and I was successful! 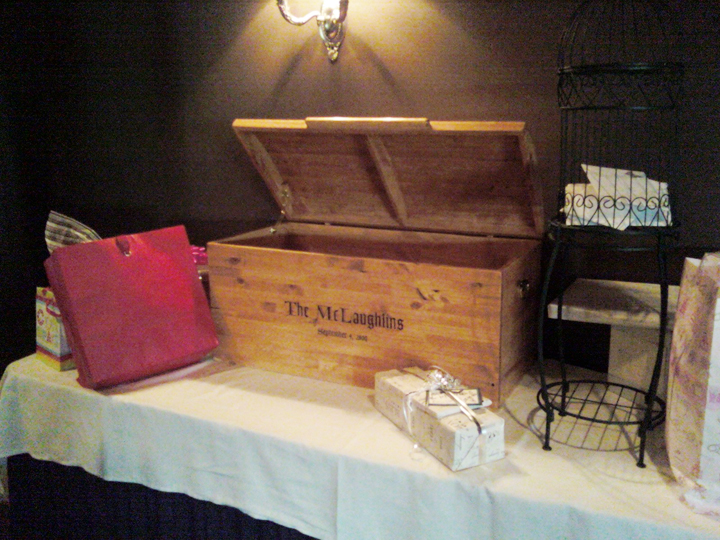 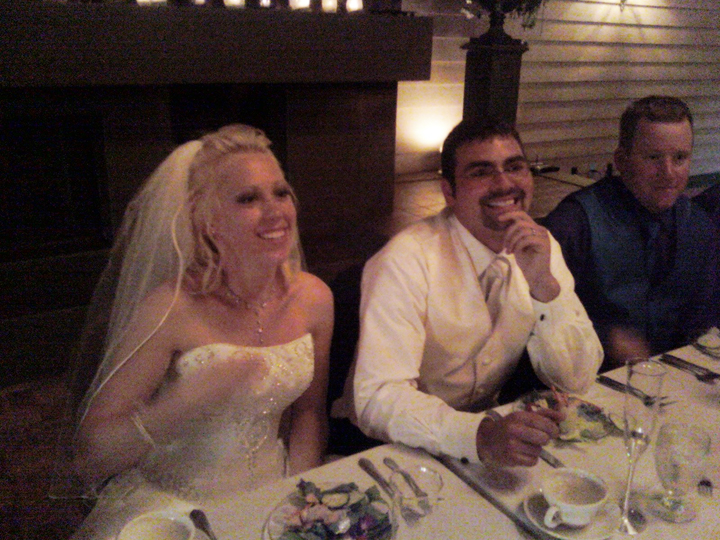 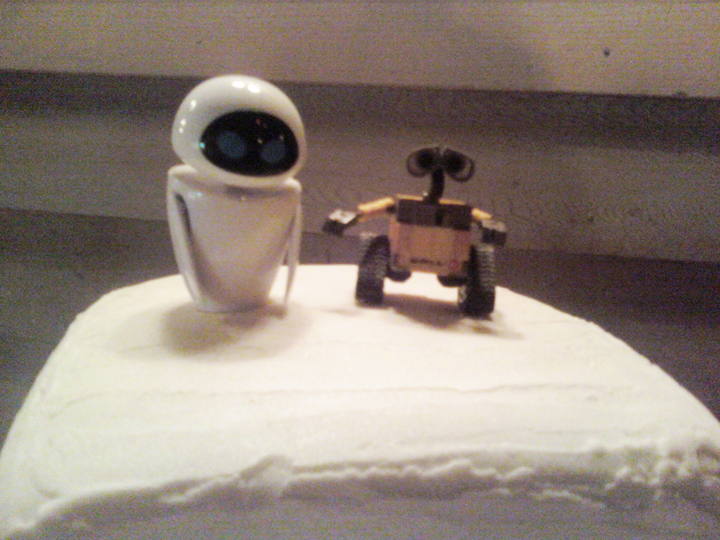 As it turns out, they're big fans of the movie Wall-E, so these two were the bride and groom on the wedding cake.

Comment by Don Grubish on November 9, 2010 at 8:02am
Thank you. I used beadboard that you can find at any hardware store. I ran the boards through my table saw to get rid of the tongues and grooves, and then ripped them down to 1 inch strips. From there, I used my chop saw to cut them to length. I finally placed them on the rounded frame I made, and used a finishing nailer to nail them into place. It's important to sand them smooth too, and if anything hangs over the two shorter edges, I sanded them flush with the lid.

Comment by Dennis L. Watson on November 8, 2010 at 12:23pm
really cool chest. What did you use for the lid after you made the basic frame

Comment by Wayne I on September 8, 2009 at 3:46pm
Very nice job. I like the wood burning. I've wanted to try wood burning for awhile but haven't had time to get into it.

Comment by Don Grubish on September 4, 2009 at 11:05pm
I just got back from the wedding. It was a beautiful afternoon and a gorgeous ceremony. When the couple were waiting to do the grand march into the ballroom, I guess Andrea looked over at the gift table and said, "Oh my God, did Badger make that?" (Badger is my paintball callsign) She then started crying because she'd never been given anything handcrafted before. I guess even Matt choked up a bit. MISSION ACCOMPLISHED. If they cry over the fact that you made it for them, then you know you did a good job.

I told her now she has something she can store her wedding dress in, and she choked up again and nearly cried in my hug. Now THAT is why I make woodworking gifts. It's not about getting paid to do your work, and it's not about it just being your hobby. To me, it's about the PURE joy you see in the recipient(s)'s eyes when they realize you made it for them. I will never get tired of that.

Comment by Derek on September 1, 2009 at 2:07pm
Don, you should definitely post some photos/videos of the wood-burning process sometime soon. I'd definitely like to try my hand at that sometime!

Comment by KregRep on September 1, 2009 at 1:40pm
Don, this looks like a fantastic project. I really like how well planned out you have the project before you start. This is a very good lesson for all of us to learn... planning a bit out ahead of time saves time, energy, materials, and a whole lot of frustration.

I'm sure the McLaughlins will love their new hope chest!