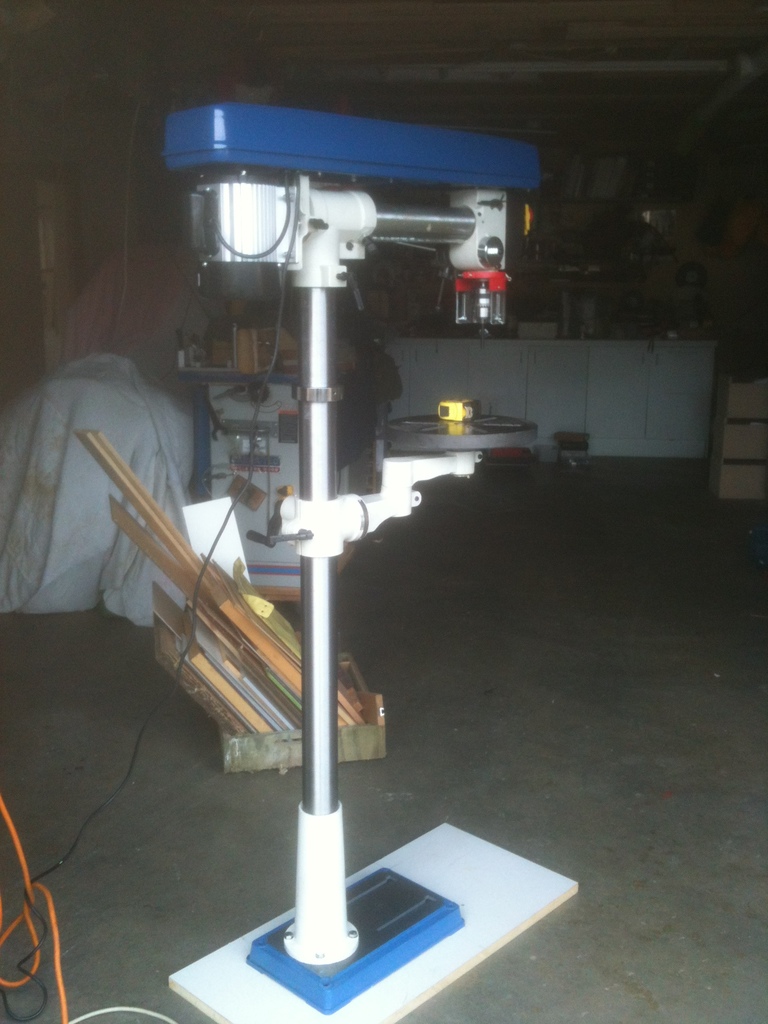 The Radial Arm Drill (RAD)  appears to be a generic model from PRC or Taiwan, then  branded to suit resellers.

It looks similar to any other brand  I saw but Carba Tech was the only AUST supplier of this entry model.

Although it is specifically designed for entry level wood work there is no reason it cannot be used for metalworking.

I did not have a suitable drill press apart from my portable drill attachment which I have had for years.

It had a distance limitation from the rear post to the chuck position of only about 120mm depth, then add a table jig and it was almost impossible to use so I needed to purchase one with more distance. The RAD gave me 130mm to 420mm more then I would ever need.

The machine came partly pre assembled and required the assembly of the post or column and base then the fitment of the radial arm mech to the top.

My first impressions of the drill were that it was a huge improvement on what I had.

The operation manual was of surprisingly good quality and had very clear graphic images  to assist the operator.

The machine was able to be set up without any problems however a work bench would be essential to assist the assembly due to the weight and size of it.

As the machine had so many features the operation of the machine is quite complicated compared to a standard drill press. This means with the added features some additional care needs to be taken when using it if repeatability and accuracy is to be maintained and produce satisfactory results.

The accuracy and repeatability is as good as you could set it up however you cannot use the drill to produce a series of holes along a prescribed line simply by operating the head traverse knob and simply drilling, there is too much movement in the radial arm section to allow this.

Considerable checking of the drill position prior to drilling and then again after locking everything up is required to produce accurate repetitive drilling.

On the RAD there is the standard quill feed handle, and a table positioning handle, nothing different there.

However you now have a couple more additional adjustable components to consider:-

As with all Drill presses:-

The Head Rotation Lock. This locks the drill at the required drilling position concentric to the column.

The Head Angle Lock. This locks the drill at the required angle to the table and,

The Head Traverse Lock. This locks the drill at the required position out from the column at the table.

All of which must be checked locked and checked again before drilling if accuracy is to be maintained.

The Head Rotation Lock. Although this is a one off lock if left unlocked you will soon know about it, the assembly will move left or right or re-emerge as a positioning error later. The

Head Rotation Lock must be engaged at every drill operation. Great for drilling concentric holes.

The Head Angle Lock. This has a 90 deg keyway and a locking guide pin however there is so much movement in the manufacturing tolerances anything from -1 deg to 0 then + 1deg of movement at the head subtend this down to the drill bit tip and there is a huge amount of deflection. The Head Angle Lock must be engaged at every drill operation. With the locking pin disengaged angles from 45 deg L and 90 deg R are possible, again engaging the Angle lock before drilling.

As to why you would tilt the head 90 deg instead of just rotating your work is a bit of a mystery.

0 to 89 deg I can understand however the feature is there no doubt somebody has used it!

The Head Traverse lock.  You would think if you were doing repeating drilling you could simply traverse the bit to the correct position and drill a hole and repeat the process.

Wrong! there is now so much deflection in the Cross Head Tee that the drill bit again deflects upon contact with the material. The Head Traverse Lock must be engaged at every drill operation. This is where the RAD comes into play in its design to drill out to 420mm.

The Table assembly. The table also has the ability to raise and lower it 700mm rotate it 360 degs or swing it out of the way completely and use the base. As to why you would alter the table angle as opposed to the head angle is not known but the feature is there !

Power switch located at the front and has VVR feature.

Guards by virtue of its operation the guards fitted are adequate for the job.

The belts are all enclosed and there is a flip up Perspex chuck guard fitted to the chuck.

This guard would have to be removed when using a hole saws or similar tool larger then 3” or 70 mm.

The enclosure and associated parts are finished well

The cast iron Table is ground to a very smooth finish making preservation and cleaning easy.

All other parts are painted.

I did a couple of Mods:

As it had a key chuck I added a magnet to hold the key at the side.

Added a bigger footprint with castors to make it portable

Added a pull chain to the base to manoeuvre it about.

I had the Head Angle locking pin remanufactured to enable unlocked traverse drilling but it was unsuccessful due to other existing manufacturing tolerances.

Quality of construction on par for PRC items

Ease of operation: Complex! Requires meticulous checking when doing repeat work. The RAD is effectively a four axis drill and requires four times the amount of setting up to drill a hole.

You would think you could drill with the Traverse lock disengaged for simplicity but its just not the case.

Not so good points:-

Poor engineering tolerances cumulating in unacceptable errors in drilling if all components are not securely locked and checked before commencing work.

The plastic crank handle on the table, this item is positioned right where one would attempt to hold the drill whilst moving it if portable, or risk breaking by impact or normal use.

There is no work light

Requires bolting in place or the fitment of an aftermarket extended foot print to prevent toppling at max extensions.

At approx $400 and if you are needing all the additional features and prepared to spend the time setting it up it’s definitely a good buy, otherwise stick with a conventional drill press.

Possibly the reason why there is not many machines in this price range available.

Is now almost 3 years since the purchase of this machine and a few update comments ar offered for information.

I have since bought a Drill press table for it and a Drill Press locking clamp.

The locking Clamp looks like a pair of vice grips with only one jaw and a locking ring bolt which attaches the clamp from under the table.

The 1/2Hp  motor in my opinion is definately under powered.

Some applications supporting this claim.

If you want to do hole saw work making wheels and the likes and is easy to stall the motor.

Also when using some of the larger (35mm) forstner bits used when making the recessed cup for euro hinges.

You cannot hold a 1mm drill bit in the keyed chuck, the jaws do not close down small enough to hold this diameter. Its not a great issue as I very seldom use a drill bit that small.

Thanks for the review. It was very thorough, no-nonsense, and a nice read overall. :)

And as for Jay Boutwell's comment, that Montgomery Wards statement made me realize how old I am by just knowing what he's talking about (let alone having shopped at the store itself). Thanks Jay! lol

Hi Robert, you got a nice drill press with a lot of features that conventional drill press do not have.  I once owned one made by delta which was sold as a power kraft when Montgomery wards was in business and selling tools in their hardware business.  I used it for a few years and sold it to a craftsman who made chairs and he wanted it for the ability of it to turn the head to angles for drilling leg and spindle holes in the seat while having the ability to keep the seat flat on the table.  I have at times missed it when I occasionally need to drill angle holes so I now have adapted to using the radial arm saw .  I placed a drill chuck head onto the auxiliary shaft.  Works but not as good as the radial arm drill press.   That was a nice write up review.  Thanks for sharing your time on this subject.