Our oldest finished 1st grade on the 21st and her birthday was on the 15th. My wife came up with the idea of building her a playhouse, so I shuffled the next project I had in mind (my miter saw stand) and made this one my first. She found a few plans that she liked on U-Bild and so we took one of those and made a few upgrades.

What better way to torment a kid over summer vacation than with a playhouse that looks like... 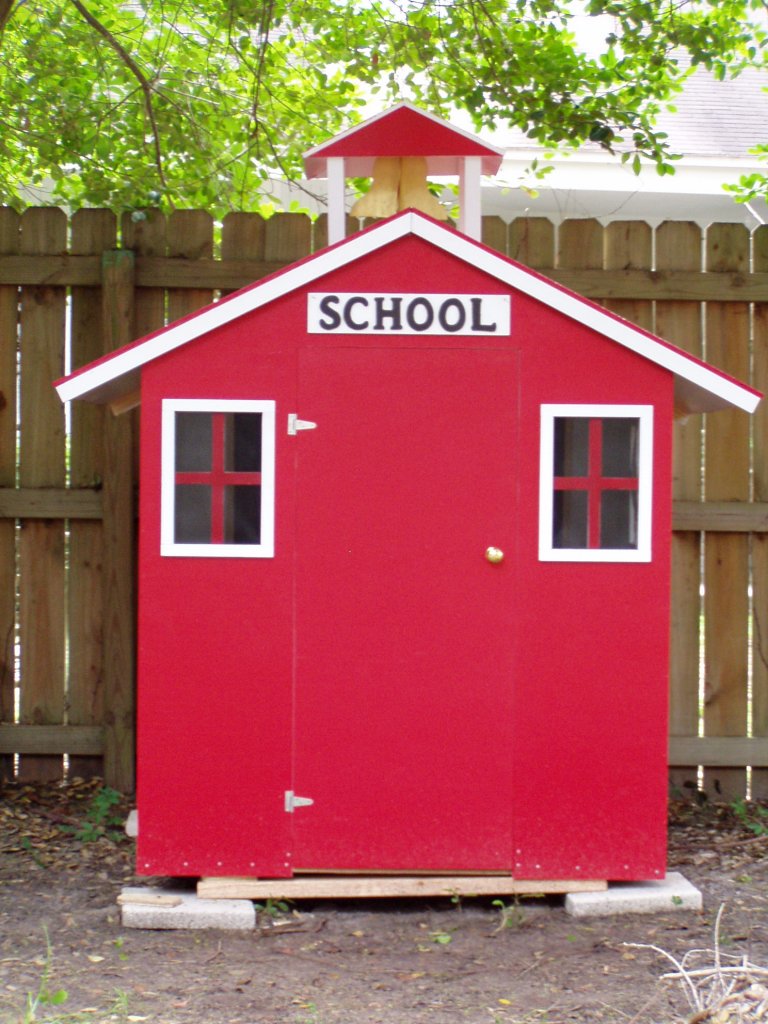 To the original plans, we...
added a skylight 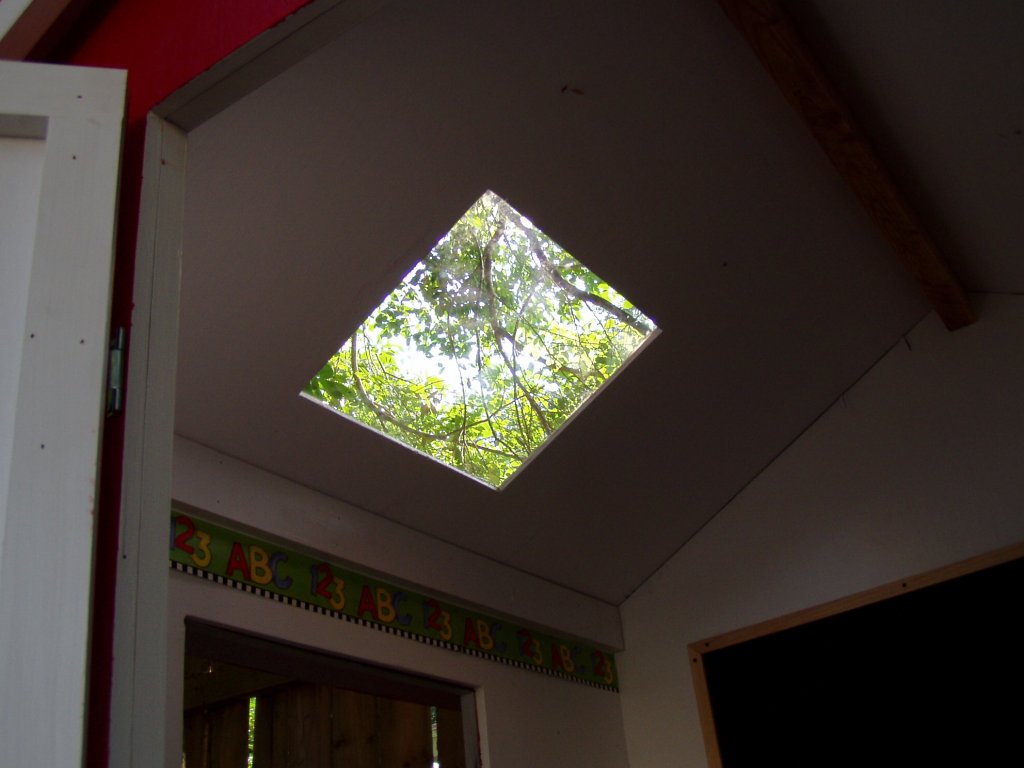 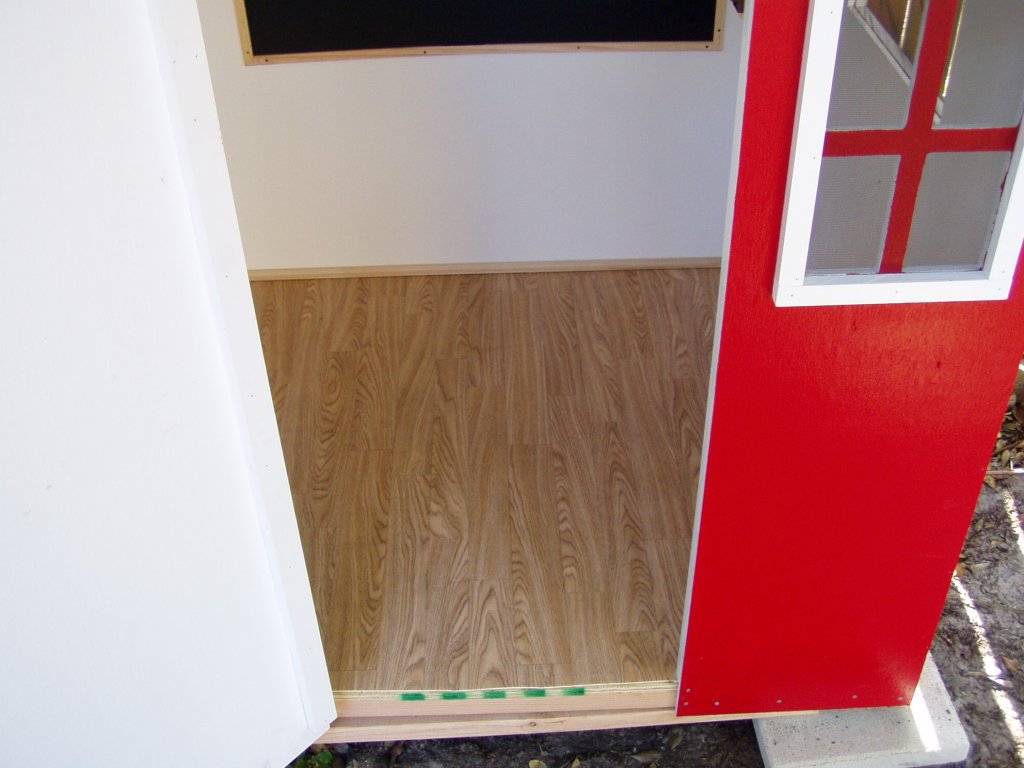 and added a chalkboard. 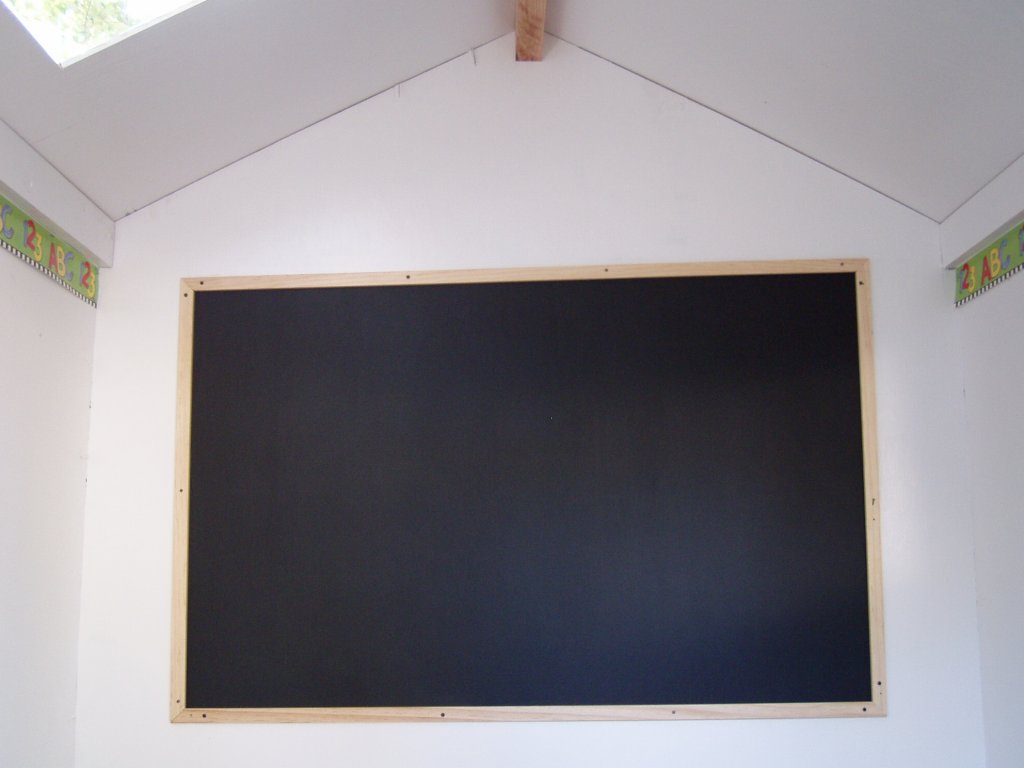 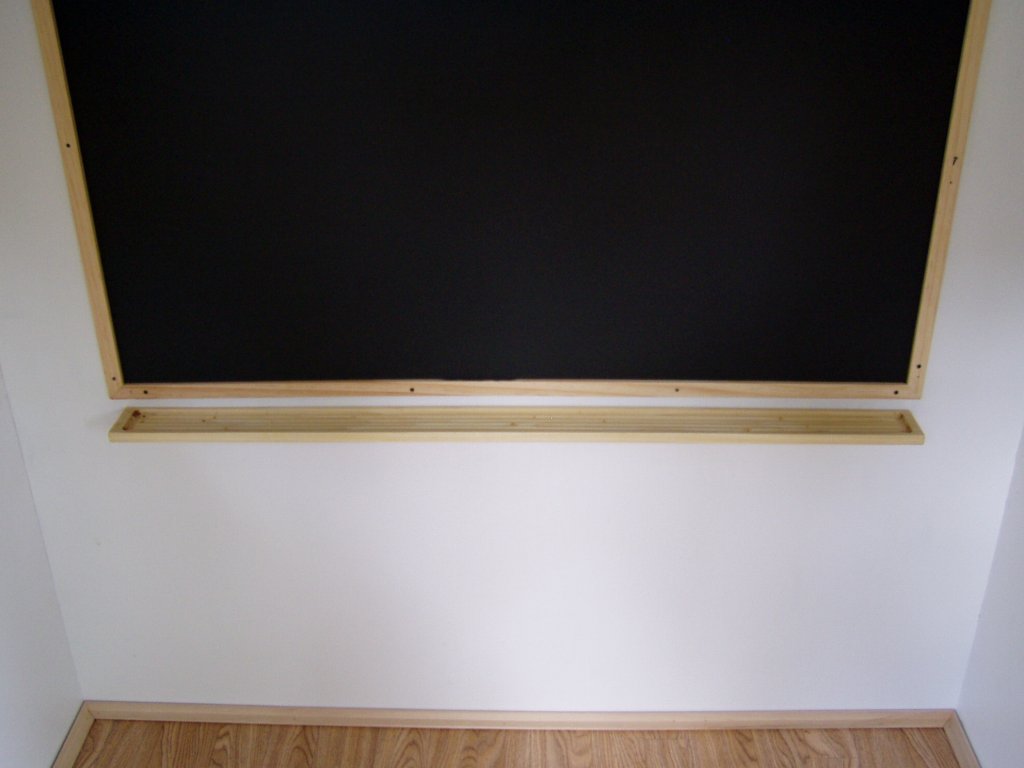 The entire back wall is primed with Rust-Oleum Magnetic paint and we made the chalkboard with their chalkboard paint. It remains to be seen how well it holds up. In retrospect i probably should have tried to get a smoother surface for the center as there may be a few too much texture for the chalkboard to work well. I made the chalkrail out of a piece of poplar that I routed progressive grooves with a 1/2" round nose bit and then coated with some satin finish poly. The rail turned out OK...it was my first use of a plunge base for my router, but I learned a TON doing it.

I had intended to use my Kreg Jig as much as possibly in building this, but after the first couple of test joints I gave up and ended up augmenting the Kreg joints with glue and nails. The walls are made from 1/2" plywood, and even after compensating for the true dimension ( 15/32") I had issues with the the sides of the pocket holes blowing out when I tried to use the right-angle clamp. Without the clamp to hold the wood together I had problems getting the joints to take, so I ended up tacking the panels together with nails and then using the pocket holes from there. So not real pleased with it on that front, but I realize that 1/2" is at the bottom end of the size range, and the construction of plywood makes it challenging to work with for that. 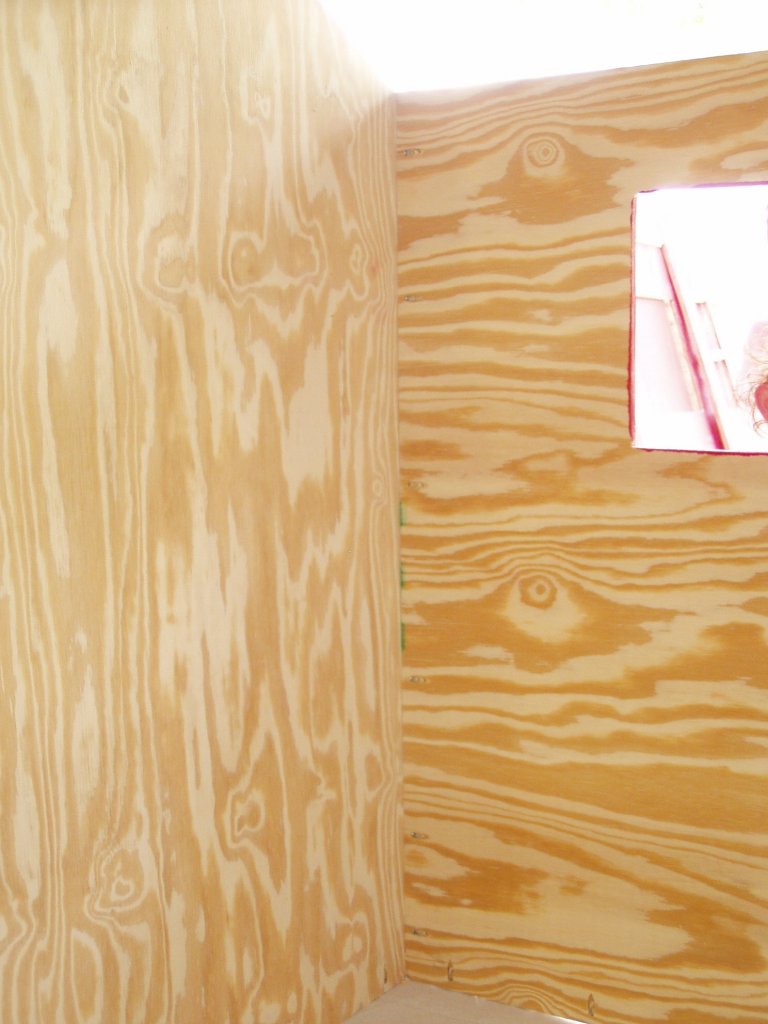 All in all it turned out really well and the kids love it, which is the important part. They made sure to check on my progress to see that I was doing it right... 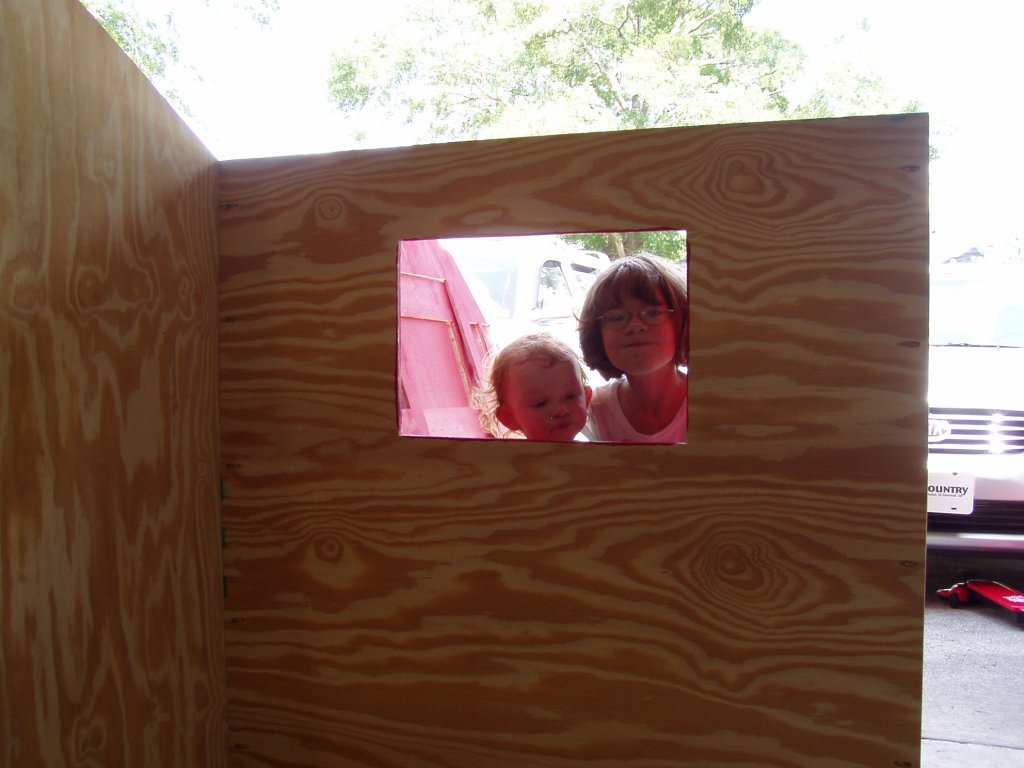 Comment by David P. Swindler on June 1, 2010 at 10:57am
Anything safely made for a child is a good investment in memories!

Comment by Timothy Sluder on May 30, 2010 at 5:00am
Nice playhouse, I just hope that it don't comes back and haunts you. Remember, she maybe the one who signs the papers to put you in the old folks home. lol. Be safe and teach her how to use the jig, keep her on your better side. Fathers day is coming up, what do you want? A new tie? or a new clamp for your jig? Hope for the best.

Comment by Don Clark on May 25, 2010 at 10:05pm
Might add a small stool inside, but its only 4' x 4' and there isn't much room to work with. With this under my belt I think it will serve as a stepping stone for the next playhouse.

Started by Joe in Beginners' Zone 19 hours ago.