Throughout my paintball career, I've met some really nice people. Two of the nicest people ever were on my paintball team, Kristina Jager and Odin Gilbertson. These two married years back and were trying very hard to have a child together. They had two unsuccessful tries before, but this third one stuck. Gabriel was doing fine and on his way this last April. I wanted to celebrate their success the best way I knew how.

Kristina and Odin do OK, but they could use any help friends and family could provide. I wanted to make them a baby shower gift, rather than buy one at Target or Walmart. I felt they should have a family heirloom, and one that speaks to their families' heritage, since both are of Nordic dissent. What better way to travel to the land of the living than in his very own Viking ship?

I kept driving to work each day, figuring out how this would come together. It seemed relatively easy in my head. For the most part, the Kreg Jig offers great joinery to cuts at 90 degrees. I wondered how much of a bond I'd get if I angled them 10 degrees off. 10 degrees doesn't sound like much, right? I wanted this so the cradle would seem more like a boat than a box with cradle rockers underneath. I decided to roll the dice.

Well, as it turns out, 10 degrees is just fine. I wouldn't put massive stress against that bond, but it would hold fine until my ends were securely fastened. The end result was spectacular. My idea during my daily commute would turn out great.

Now that the cradle box was complete, I clamped two 3/4 inch boards together and with a jig saw, cut out my rockers and sanded them to perfect roundness. I left those aside for later. Next, using the magic of Adobe Illustrator, I was able to draw out a dragon head and tail, and printed them out at 100% size. I took those printouts home to use as guides. I rubbed graphite sticks to the backs of them, and taped the printout to the wood. Tracing my drawing, it transfered the image to the board so I could come back in with the jig saw and cut out my head and tail. It worked perfectly. However, I must admit that my first dragon head broke on me with the vibration of the blade. Grrrr... After the second attempt, I had a good head cut-out.

I got creative and used the Kreg drill bit to drill straight on into the ends of the cradle box, knowing I'd then screw in Kreg screws to secure the head and tail. Yes, I know, what about the pocket hole idea? Well, this way, I made small circular holes that I could later plug up with screw plugs. I placed more screw plugs on the neck and tail of the dragon, so the theme carried on with the screws, making it all look the same throughout. It carried the theme nicely, and still hid my screw heads.

Lastly, I screwed braces to the rockers, and stained them dark like the rest of the cradle. I gave the rocker assembly off to my roommate, who is a great artist with acrylic and oil paints. He painted waves on the rockers as I continued on with cutting out 6" diameter shields (12 in all) to put six on each side. I used the same technique with the straight-on screw tapping for each shield. I hid the screws with rounded screw caps, and later painted them silver to look like rivots. After painting the shield designs on all 12 and securing them in place, I stained the entire cradle and applied coats of polyacrylic finish. The end result was a dark stained, smooth as glass, cradle.

The rockers were added after their coats of finish, and I woodburned in a poem on the bottom of the cradle as well as signed it. I was done, and couldn't wait for the baby shower to hand it off. While all of this was being done, I had two friends of mine sew sheets and blankets for the cradle, using a red/white theme to look like ship's sails. They turned out GREAT.

The day of the shower, we had them open up all other gifts first, and then finally my card. The card was another poem for them to read, with the end message basically stating that my gift was too large to wrap, so they had to close their eyes. We then went into a back bedroom to retrieve my cradle and gently set it before them on the floor. When I allowed them to open their eyes, they were speechless. They had no idea what to expect, and when they saw this cradle, a one of a kind, sitting before them, they were in near tears. So was I actually, because I'd never given a gift of this nature away before.

If ever you guys need to come up with a gift for someone else, try making it out of wood. Be it a picture frame, chest, chair, whatever, make it yourself. They will love it a thousand times more because YOU made it. It will stay with them a thousand times longer because it wasn't store-bought.

This was a labor of love, and I'd build them 10 more if needed. Of all my projects, this one was by far the most fun, because it utilized all of my creativity. There are no plans for this cradle. It was completely conjured up in my head. I knew no bounds on this one. Again, the Kreg Jig allows that to happen for you. Sure, probably other joinery tools can do that too, but not as quickly and easily as the Kreg Jig. 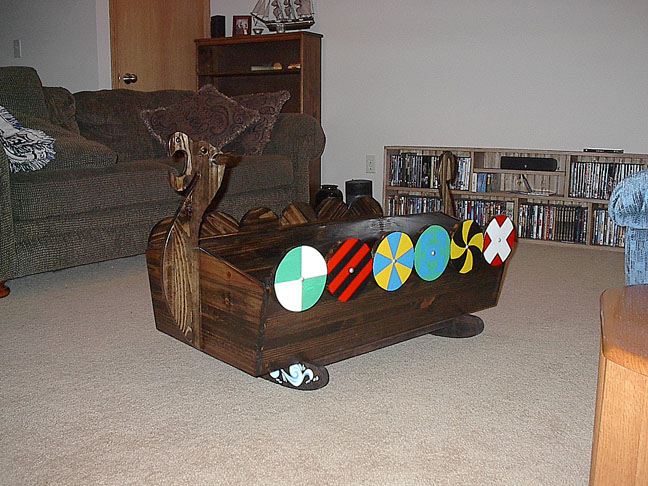 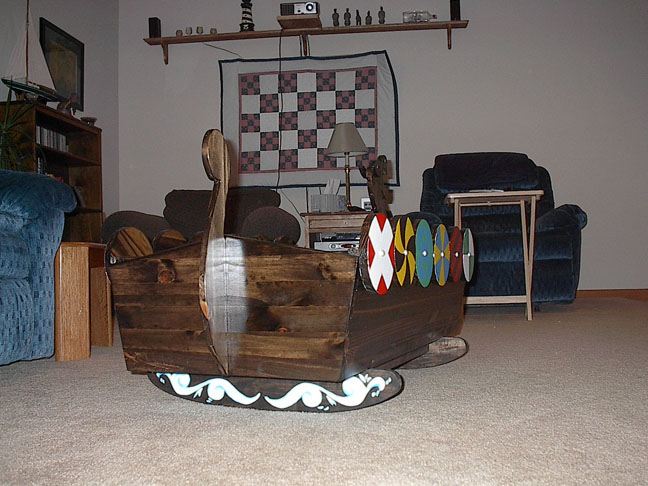 The shield designs must have changed at least 7 times before I was happy with the collection. 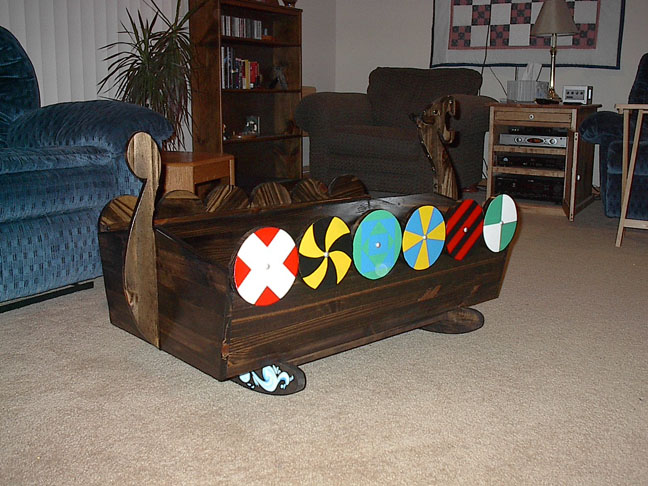 The waves were painted with the theme of Nordic art style. Every part of this project was carefully thought out. The end result is something Gabriel Baden Gilbertson will cherish into his own adult life and pass on to his family one day.

"If ever you guys need to come up with a gift for someone else, try making it out of wood. Be it a picture frame, chest, chair, whatever, make it yourself. They will love it a thousand times more because YOU made it. It will stay with them a thousand times longer because it wasn't store-bought."

Comment by KregRep on May 15, 2009 at 7:40am
"When I allowed them to open their eyes, they were speechless. They had no idea what to expect, and when they saw this cradle, a one of a kind, sitting before them, they were in near tears. So was I actually, because I'd never given a gift of this nature away before."

What a fantastic story. Thanks for sharing, Don. Beautiful themed cradle by the way. Blown away by all of the unique projects being posted here!

All of my cuts are slightly beveled.  I am leaning on saw in one direction to keep it tight because it feels like there is a tiny bit of looseness in the saw sled at the rear.  I don't have this problem with the Accu Rip and the same sled.  Had to…Continue

Ok, just to let you know. I don't know one end of a bit of wood to the other !I need to build a loft bed for my 14yr old daughter for her new small room.would 30X70mm be large enough to make it out ofThanks for any inputPS anyone got any plansContinue