Over the weekend my family and I went to the Denver Home Show held at the National Western Complex. It was more of a research/idea gathering mission than anything else. We're in the process of doing a lot of home improvements and remodeling (like most homeowners are) and thought this would be a great place to get some ideas and resources and had no intentions of buying anything or signing up for services.

Highlights of the show

There were also a few workshops which we didn't really participate in but did catch one which was a flower arrangement class. It was along the lines of a specific style of Japanese floral design which unfortunately I can recall the name. I kind of wish we would have caught it sooner as I think my wife and daughters would have enjoyed participating in it.

They also had demonstrations from William Moss from HGTV's "Dig In" show. We missed William's segments but that wasn't too big of a deal for us. We rarely watch HGTV as it's lost it's appeal anymore with it primary lineup of how to make money out of your property shows. The DIY channel is my favorite.

Low Lights of the show

Yes there were some low lights. The biggest one was how some vendors either reacted to or really didn't seem interested in talking to us once they found out we either weren't buying or signing anything today or that we live two hours away from the Denver area. We have a plan on our home improvements and are going to be dumping a lot of money into our house and the opportunity for those vendors to get in on that was there but apparently it wasn't soon enough for them. When approached we complimented them on their products and informed them that we're not going to be doing anything until next year and that we don't live in the Denver area. Several either responded with "We don't go out that far." and would turn and go talk to another potential customer. Right there that excluded them from any potential future business we may have for them. There were a few I spoke to that were honest in saying they didn't service our area but was very interested in the possibility of expanding out our way. I did get their contact info.

The garden area was also a disappointment. Maybe I was expecting too much but all of the displays looked the same. You could line each of the landscaping displays end to end and they looked like they all could flow into each other. Nothing really stood out to draw my attention in and say "Wow!" Don't get me wrong, they all did lovely work but nothing really stood out over the other. I had no feeling of "I want this company to do our yard." instead I felt more along the lines of "Hmm, that looks pretty simple, I could do that."

There also wasn't much for tool vendors there, I think only two. This is something I would have liked to have seen more of. What types of tools are available for the home owner beyond a lawn mower.

One of the biggest reasons I wanted to go was to see what information I could find on "green" technology.

There were a few true "green" vendors there, those that dealt with renewable energy products; lots of solar panel re-sellers but no wind which I was disappointed in. In my neck of the woods, we could really benefit from both technologies.

We have sunny clear skies here in Colorado 350 days out of the year and have decent winds the majority of the year. On those cloudy days, the wind could help make up for the lack of sun. We're not really able to go with full solar panels but most vendors have solar powered attic vents which would be really cool. (no pun intended!)

Products that stood out

There were a few products that stood out in my mind. There was a couple of artificial turf companies which make some really impressive products. I love my lawn but there are days when I would rather be goofing off than mowing!

The solar powered attic vents and solar water heating solutions. I live with three females and one bathroom, how often do you think I get a hot shower? Adding an additional heating source that uses renewable enrergy would be a very cool option. 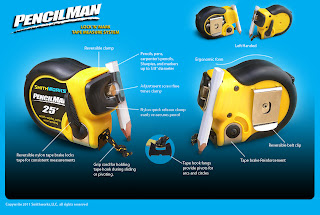 As I mentioned before, I had no intention of buying anything or signing up for any services. However I did come home with a couple of products. The first one is a super cool tape measure with a way to mount or hold a pencil. It's called the PencilMan and it's super cool! it's one of those "Damn, why didn't I think of that!" products. I highly recommend checking it out. They are also a local Colorado company. 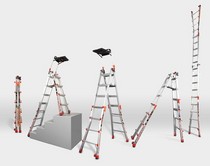 I also came home with the Little Giant Extreme ladder. it's an A frame ladder that is well, awesome. I hate getting up on ladders and have been looking at these types for quite some time. Although the price has kept me away from investing into one. My wife, whom is our financial genius discussed it with me and said we were good if I wanted one. What I love about this ladder is that it has flared ends which helps stabilize the ladder better than traditional ladders. Also it's versatility just rocks; it has several options, a work platform that easily attaches anywhere and makes standing a lot easier, a leg leveler which attaches to help in those not so level areas, a bucket that you can put a gallon of paint in, the airdesk workstation which can hold a gallon of paint, tools and more. One of the coolest features is that you can separate the ladder pieces and make scaffolding with either wood or their scaffolding add on. (I got their add on) With the upcoming painting of the house, this ladder is going to make the job so much more easier and quicker. Honestly, I know these types of ladders are expensive but I would highly recommend looking into one.

As I mentioned earlier there was some unexpected surprises. I was amazed at how many food vendors there was. Everything from chocolate to chiropractors to starting your printing company. Now I'm not quite sure how this fits into the whole "home" aspect but it was a nice break. We did pick up some spices for dips and salsa from "To Market To Market". A local company out of Loveland, CO. their stuff was really good! There was also demonstrations of cook wear and dog training. Even a booth by the local Denver Greyhound Adoption group.

We enjoyed the Denver Home Show and I would highly recommend going to one if you get the chance. Admission was $11.00 but there was a discount so it only cost $8.00 for people ages 12 and up. For a day of cheap entertainment and some free goodies (pens, clips, squishy balls) you definitely get your money's worth. The only thing I would like to have seen more of is a better garden section, more vendors for things like tools and guy related stuff. However be forewarned, you'll do a lot of walking and you'll get thirsty!