Lots of people suggest backing out the screws a bit when joining the table top to avoid cupping allow for seasonal movement.

My question is just how much do you back them out, and on which joints?

I'm assuming that it's only in the apron to table top joints, and not the edge joints between the actual table top pieces or any of the support structure. Do you back out the screws on the breadboards?

(corrected the title to avoid confusion for future readers)

No ... the breadboards were only attached with screws.

I decided to put one down the middle of the table like in the photo below ... which i now realize means the table is going to look like a pretzel in a few seasons :) Thinking of dismantling the whole top, re-using what i can in another project and redoing the top from scratch. 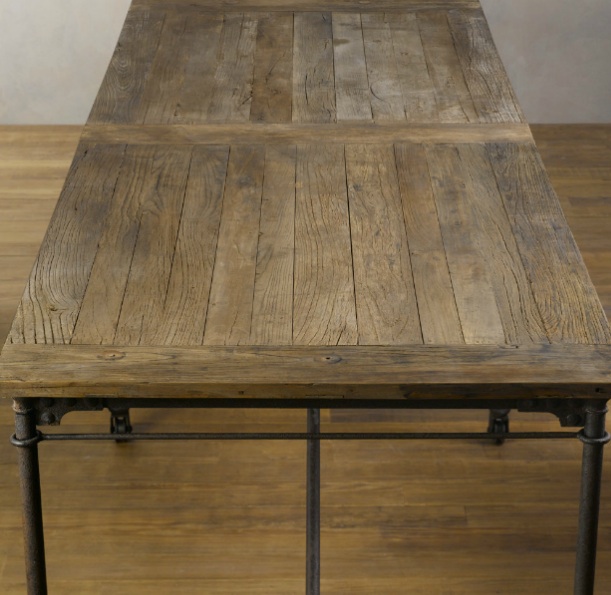 Is the center breadboard glued?  Are the slats glued?

If the center is not glued, the holes could be enlarged.

If the parallel slats are not glued, they will behave like floor boards

No ... the breadboards were only attached with screws.

How do floor boards behave?

(btw ... really appreciated you taking the time to help me out here)

Rick said: Is the center breadboard glued?  Are the slats glued?

If your table top has no glue, then I think it should be OK.  There should be enough movement between boards to accommodate changes in moisture.  The worst that will happen is small gaps open between boards, just like they open up every winter between floor boards, and no one is bothered by that.

If kreg screws create such a strong joint, then why don't the kreg screws that are holding the parallel slats together in the table top have the same effect as glue and prevent the necessary movement from happening between the boards?

Knowing that there's no glue at all in the entire top,  am i still asking for trouble if i don't enlarge the holes for the breadboards? Am I right in assuming that if the movement is happening between the boards, and the outside boards and breadboards are secured to the apron, then the outer edge of the table will only move minimally and the bulk of the shifts would occur as you were saying as gaps between the boards?

(and just in case anyone is picking up this thread midstream , that's not my table in the photo above, just a reference for the top i'm making)

When I looked at the table, it did not look like the boards were run thru a jointer and perfectly clamped up as if you had glued and screwed joined boards together.  I may be wrong.

Also, if the movement in the tabletop held by the 3 breadboards is only restrained by shear forces in the pocket screws or friction forces due to clamp up, I just don't think it is sufficient to cause damage.

In other words, say the table began to shrink across the grain due to a drop in humidity during those cold Canadian winters.  The pocket screws in the breadboards, especially at both ends, would attempt to prevent the top from contracting. The clamping force of the pocket screws would have to grip the table to the breadboards and not prevent sliding action.  There is no glue to help out here.  Once sliding action occurs, then it would take little force to deform the holes around the screws and allow motion to occur.

I think the internal forces holding 2-by boards together will be stronger than the clamping forces from the pocket screws.

At this point, however, I would need input from another woodworker or an actual test to absolutely confirm my suspicions.  Worst come to worst though, you get a January crack in one of the table boards and have to glue it back together.

Best of luck to you.
Shift said:

If kreg screws create such a strong joint, then why don't the kreg screws that are holding the parallel slats together in the table top have the same effect as glue and prevent the necessary .

that middle breadboard seemed like a good idea at first but has given me a lot of grief. On the plus side, it meant that i was using short slats that I could easily handle by myself when putting together the parallel planks - a good thing when you're building your first table. But when i got the two sides of slats done and went to attach the final one to the middle breadboard, i had no way of clamping the middle slats and ended up with a couple of boards not flush. Still experimenting with methods to fix this. Might have to disassemble and drill new pocket holes, because no matter what kind of weight i put on those middle boards that aren't flush, when i go to screw them back in the screws just find the original holes.

Shift, that middle board adds a lot of unique character.  Another benefit for rustic, twisted boards is to have short lengths.  Some of your boards have "wild" grain, and to keep the rustic look, perfection is not an option

Your table almost demands that the board edges be not flush.  I understand there are limits to how much offset is acceptable, but smooth table tops require that all the boards be sanded or planed after assembly, and I don't think that's the look you want.

Btw, what kind of finish is on that pine?

if that is recycled lumber, it shouldn't twist or cup any, right?

Yes.  Many folks don't get the mechanics of breadboards, because it's all hidden.  As the article you referenced showed (and Rick pointed out), the idea of the breadboard is to provide a guide to keep the top flat, while allowing lateral expansion and contraction.  That magic happens through the use of tenons on the ends of the parallel boards with slots in the tenons instead of round holes.  The mortised breadboard gets pegged through the slots (and round holes in the breadboard) to keep it attached while allowing the lateral expansion and contraction the parallel boards need.  Since your table is rustic (no finish or minimal finish), this really comes into play.

I'm trying to think of a "Kreg simple" way to do a breadboard-like layout that would provide similar mechanics without all the joinery.  The joinery is good (and good to know how to do), but it seems like there are lots of folks who might be interested in a simplified approach.  Hmm...

OK, so here's my thought:  if you were to put the pocket holes in the breadboard so the screws go into the ends of the parallel pieces, and drill each pocket such that it was actually two holes (or even three) with the shanks overlapping, you'd allow the screw to move laterally in the resulting slot, but not up and down.  This basically achieves the same mechanics as the mortise-and-tenon breadboard.
Shift said:

Interesting ... I attached my breadboards with screws/pocket holes all the way across ....... sounds like I could be in for some serious trouble.

The only time I saw a piece literally self-destruct was when  .....

That's not my table .... just a photo i found on the web that i've used as a reference. I'm using 2" pine dressed by my local lumber yard that my 5 yr old and I are distressing with all sorts of strange tools he created for the job :)  The distressed wood was what i was looking for but it was also a way to hide the inevitable mistakes.  Looked at reclaimed wood for this project, but the cost didn't make sense since this was my first try and I was bound to make mistakes.

Thinking of taking an orbital sander to some of the boards that aren't perfectly aligned, and then hoping i'll get a relatively smooth top with the dips and valleys from sanding blending in with the distressed look.

@Jeff..... as I mentioned earlier, I'm still at a stage in building right now where I could abandon the top i've built, keep the apron and legs and build a new top with much more knowledge thanks to you and Rick.

I don't want to waste the time and money staining the top if i've pretty much set myself up for serious problems, but if i'm just dealing with cosmetic issues, like gaps between boards and boards that aren't entirely flush then I'm happy to try to fix them as much as possible and then try to blend them into the distressed look and then try building another table 8-12 months from now after I've done some more smaller projects and had time to learn some more techniques.