I bought some decent soft close hinges from the Big Orange yesterday. My workbench project is finally starting to come along, so I was planning for doors and drawers. I am the farthest thing from a cabinet maker you can be, so my question is."Is it normal for cabinet hardware to be measure in metric?". My wife made a funny point about the hinges as well. On the pack it says Made in U.S.A., but it says so in three languages, on one line. Then I open the instructions and get hit with this mm stuff. I can figure it out, but this is the good ol' U.S. of A. I want my country back!!!! 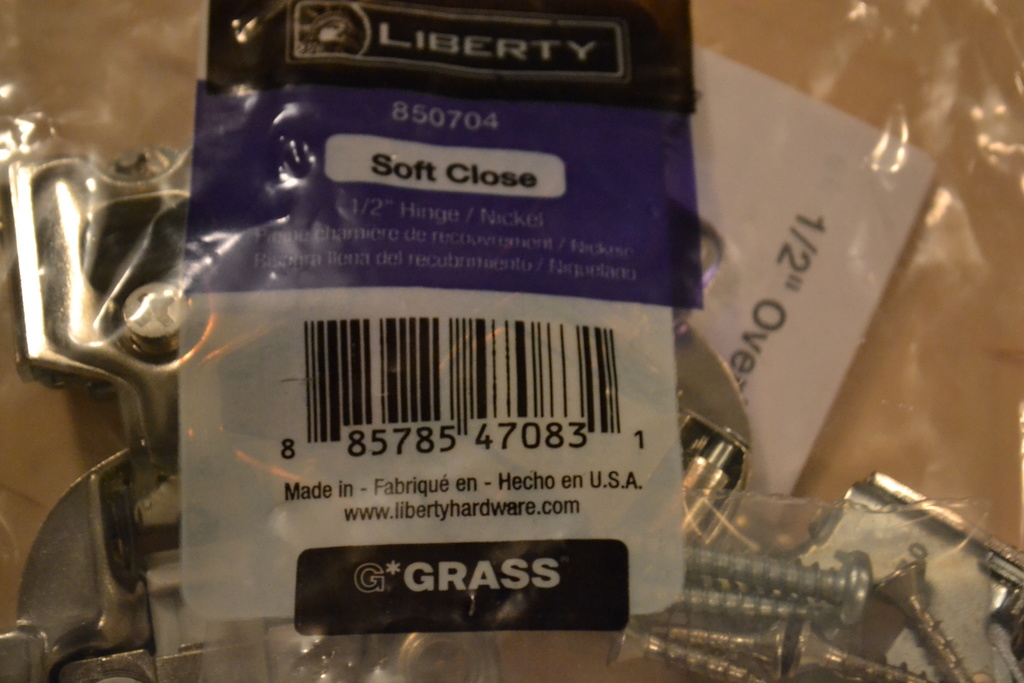 Here is something educational:  As you can see I have written a lot about European hinges and how to figure them for overlay and their use.

Today I had a new customer come into the shop with a cabinet door of which has some hinge problem.  The hinges were installed using the dowel system and the dowels were pulling out of the door causing the doors to fall off.

The person informed me that he had his kitchen built recently and he has been having problems with door and how the door were opening and closing saying that the doors were coming off the cabinets.  He tells me that the cabinet shop that did the job is not out of business as of about a month ago.

I took a look at the problem removing the hinges and noting the following:  The hinge cup hole should be a 35mm and that is very close to a 1 3/8 dia bit.  The dowel hole which is a 8mm bit should be spread as an equal distance in the door frame and should have the same door edge reveal of near 1/8 of an inch.  All the holes need to be bored at a perfect 90 degree to the door frame surface.

This is what I have found:  The 35 mm hole was drilled with a off centered bit resulting in a oblong hole.  The dowel holes were drilled crooked both inward and outward to the door edge.  The results would be a hinge that would seat into the hole but had travel room but the dowel holes would not allow the hinges to mount flush with the door surface.  As you will see in the attached photos the hinges is protruding upward and is bent from the attempt to secure it in its mounting hole.

As with everything else hinges and styles are changing and this is why I stated in my discussions that I never use the dowel system.  It is impossible to drill all three holes as exactly the correct spot on a door using a drill press or hand drill.  The cup hole is easily drilled with the drill press and a jig as I have previously discussed however it take a special jig that mounts all three drill bits at the same time.  That means a drill head that has the 35 mm boring bit for the cup and two 8 mm bits for the dowel holes.  There portable ones of which work but are expensive.  I do not use the dowel hinge as there is too much of a chance to have problems and problems is something you do not want to have and especially in the doors as that is like the flowers on a prom dates dress.  You can have a perfect cabinet and face frame and lousy doors and you have just shot your self in the foot.

In this case the change is in the dowel system.  They are the new "salice" brand hinge but has dowels that must have the dowel holes perfectly spaced and correctly drilled.  You should push the hinge into the hinge cup as the same time as the two dowel and then holding them securely into place turn a screw 1/4 turn to move the dowel into a locked position within the dowel hole,  In the installation or this job I could see where the hinge was hammered on bending some to the mechanical movement of the hinge and then in an attempt to seat the hinge.  Then to tighten the hinge they used a drill driver to continued to turn the dowel screw until the dowel worn down and in the process drilled out the holes  leaving the hinge worthless.

In talking with the gentleman he informs me that there are better that 1/2 of the doors that have loose hinges and since he tells me this I expect that all of them are that way.  That means that there are a total of 57 hinges on the doors (2 one each door and 3 doors have 3 hinges)  That means he will need to buy 57 hinges.  The only way to fix the doors  short of rebuilding he doors it to install a total of 114 dowels that are wood and glued into place and then cut off flush and new hinges installed using the screw.  Expensive fix I would say and a reason to be careful in building doors and installing European hinged.  Another good reason to stay away from new types of hinges and use the time proven screw installations.

The below link is to the photos of the hinges and door.  Play large screen by clicking onto the icon on lower left and exit back to small screen using your key board "ESC" button.