Has anyone built cabinet door frames using pocket holes to join the rails and stiles?

I have to build a few more doors for my cabinet project, and wondering if I can get away with using pocket holes.

The existing doors are shaker-style, birch 1x3 and 1/4" birch plywood for the panels. I built the doors using tongue/groove, but wondering if I can get away with just using pocket-hole screws and glue to connect the rails and stiles. These are for upper cabinets. Wondering if I am asking for trouble.

This is for cabinets at a cottage, so they wouldn't be used as much as a normal kitchen.

Picture of the existing doors attached. 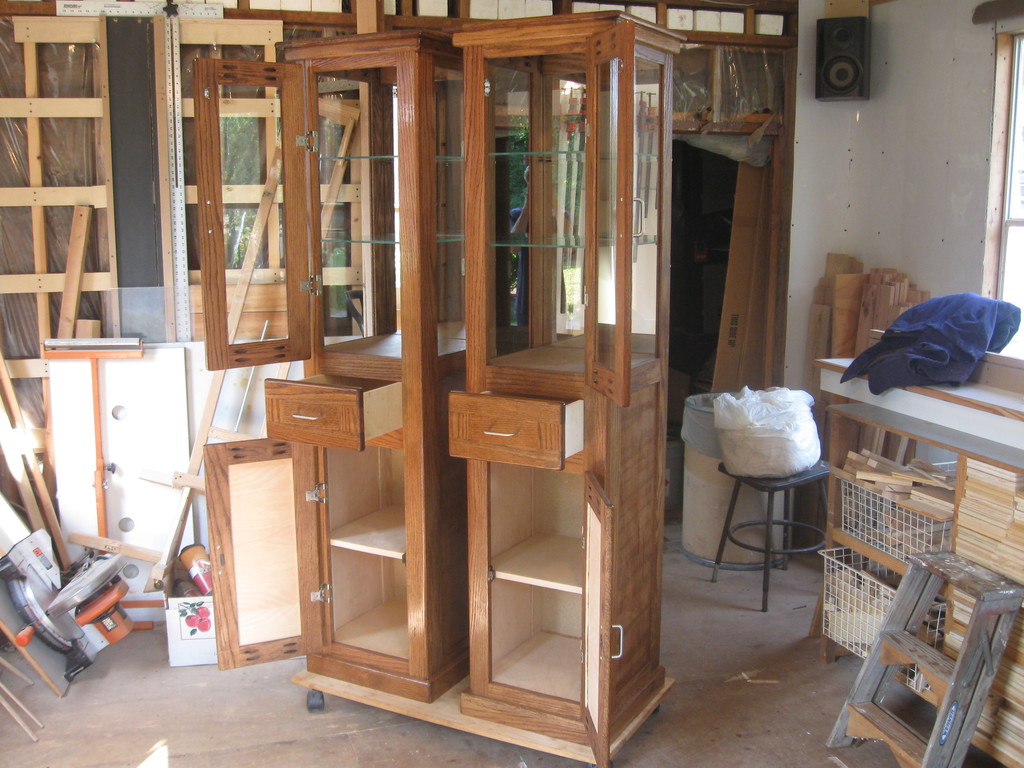 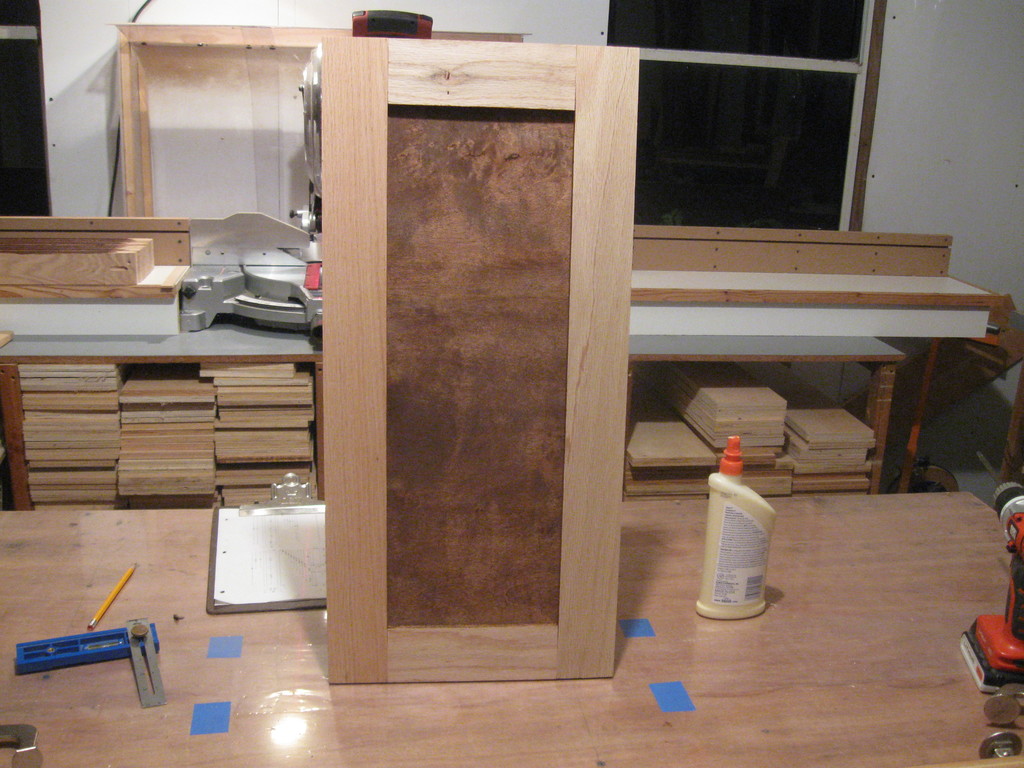 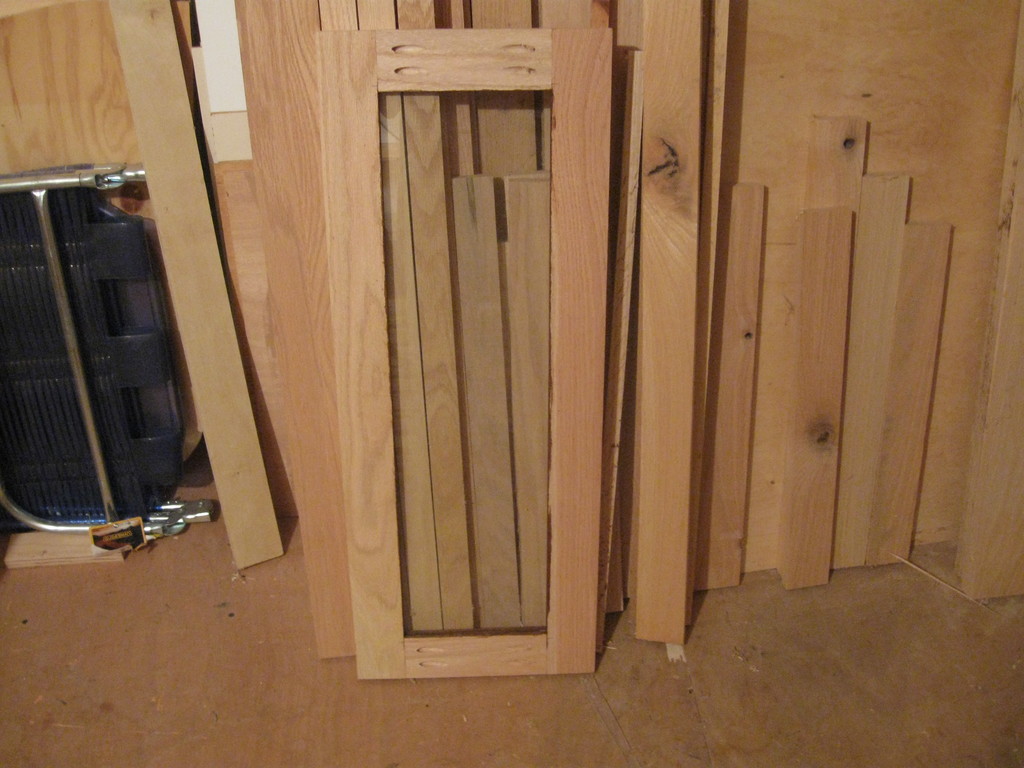 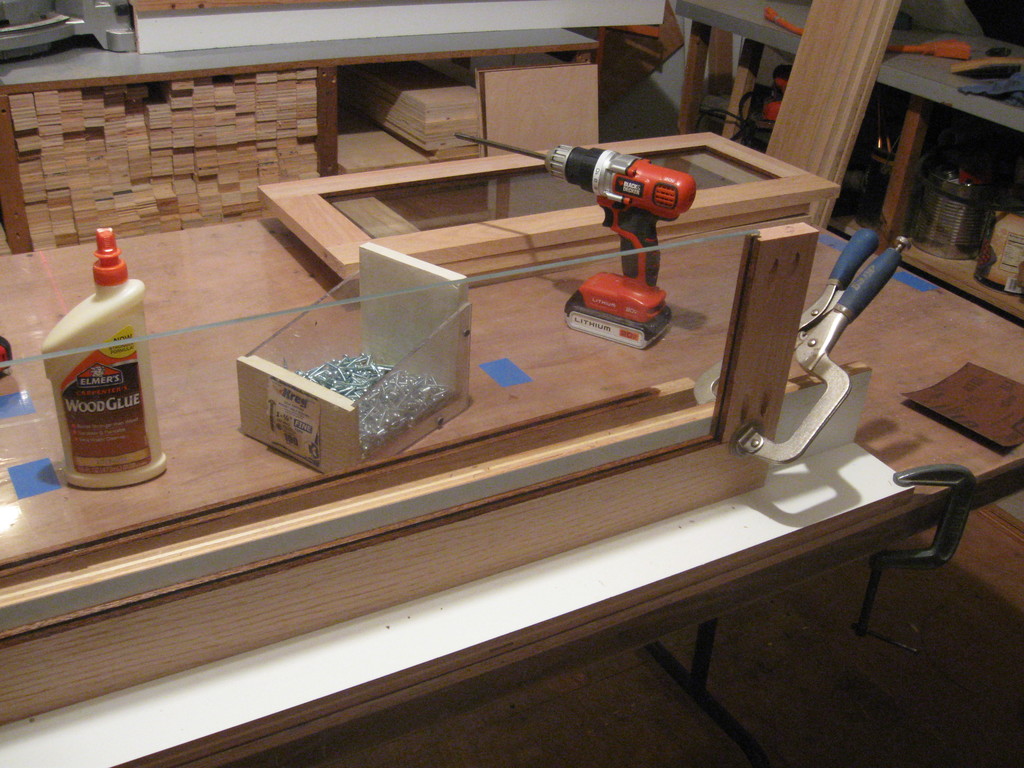 Well Derek if you got a blue jig you need to 13/16'' form the edge's on both side's and 1 1/2'' at the center so you wont hit anything but you my thank about putting it togather the use a rabbit on the inside. My table saw is setup for cutting dado's only and some say it is dangeruse. 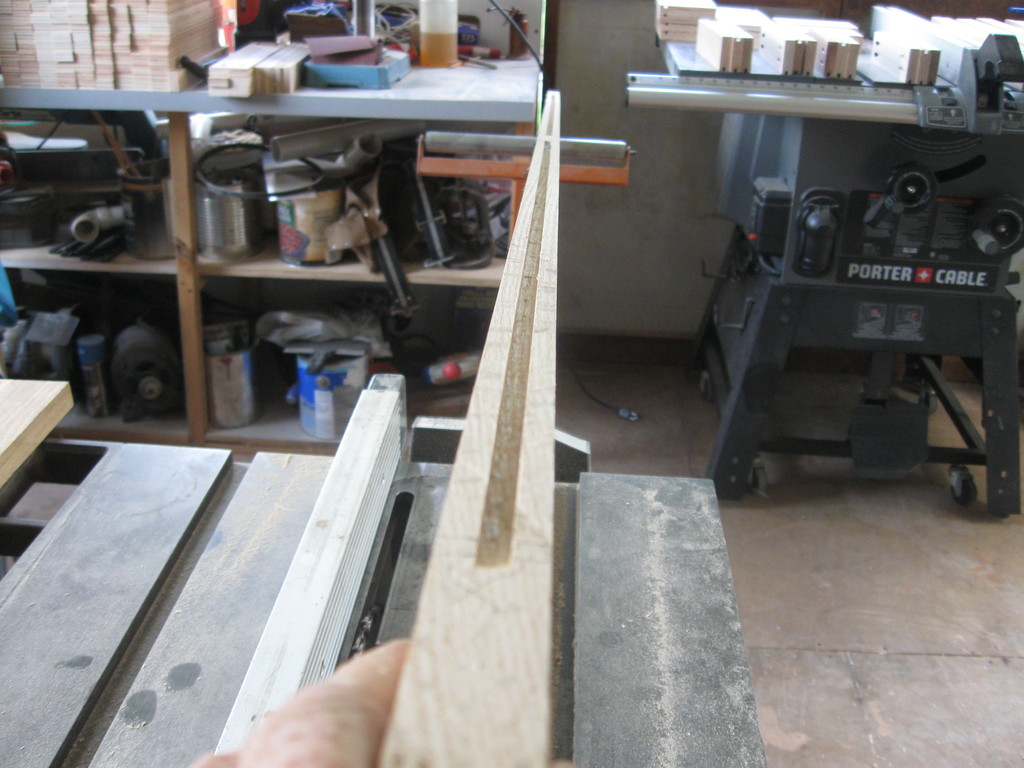 For the doors, however, I just didn't think pocket holes would be strong enough.  If they were, probably more doors would be built this way.  I think that the glue joint is weak, since it is end grain to side grain. I am building them now.

If your way works, it sure would be easier than what I am doing.

Surface areas are much greater for the gluing to be most effective, and provide the strongest joint.

Tongue and groove is another choice.

it's easy, simple and faster.

Best choice for beginner and novice.

Rigidity can be accomplished by gluing the insert panel in the frame.

Pocket holes can be plugged, to cover the openings and prevent unwanted guests from harboring in the voids.

(Spiders love to reside in the open pockets).

David Dean does it and he's a badass, so I say go for it.  I don't use them for doors because I have multiple Freud rails and stile bit sets for my router.  I find it easier to throw in the bit, use a setup block, run my pieces through, and glue 'em up.  But there's a lot of ways to skin a cat.  I don't think the fact that a door moves should make any difference.  The pocket screws are strong.  Try it -- if it doesn't work, you can always go back and redo the doors. As far as the question about using a stopped dado for the panel, be careful -- those are hard to cut accurately and safely since they almost always involve at least one cut per piece where you are "dropping" the workpiece onto a router bit or a TS.  Best to run them the whole way through then plug the visible part on the top and bottom of the door with a matching piece of wood.  Cut it a little tight but with the grain going the same direction as the top of the stile, glue it in, saw it flush, sand, and no one will ever see it.

Thanks Russ but there are a fow who are batter than me with a Kregjig and you anit do bad your self and jame's is doing great with he's bench's .But everything I show is from the wood shop not a computer or book and here is two more doors I thank they are 4 years old and thay are still in use. 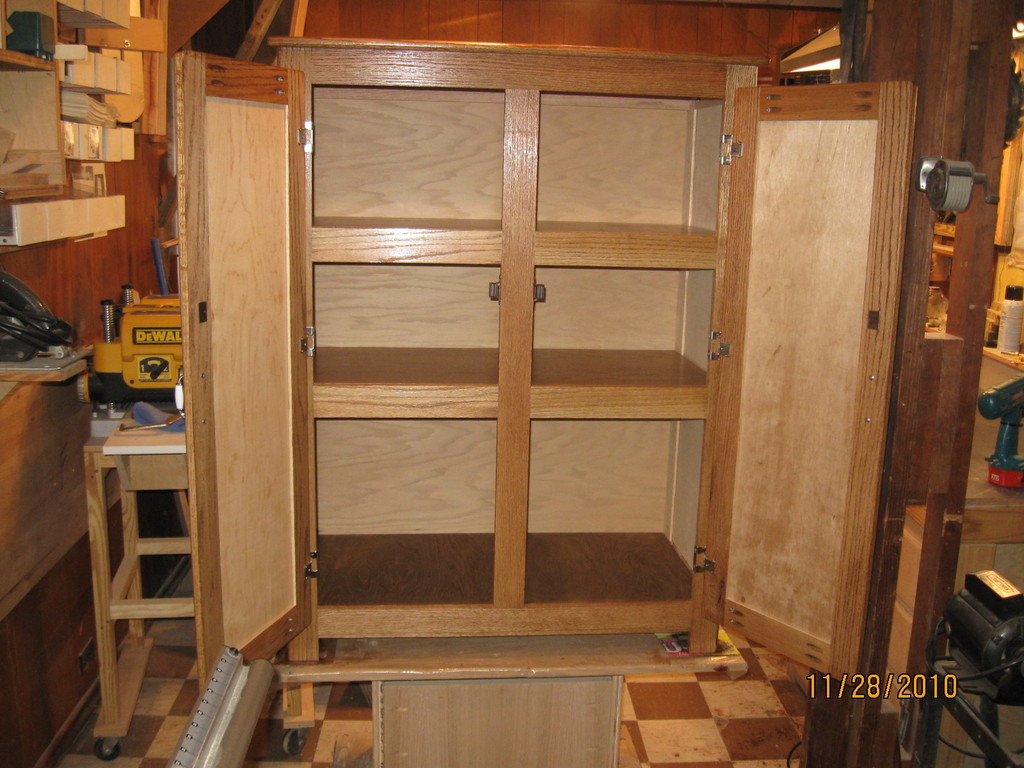 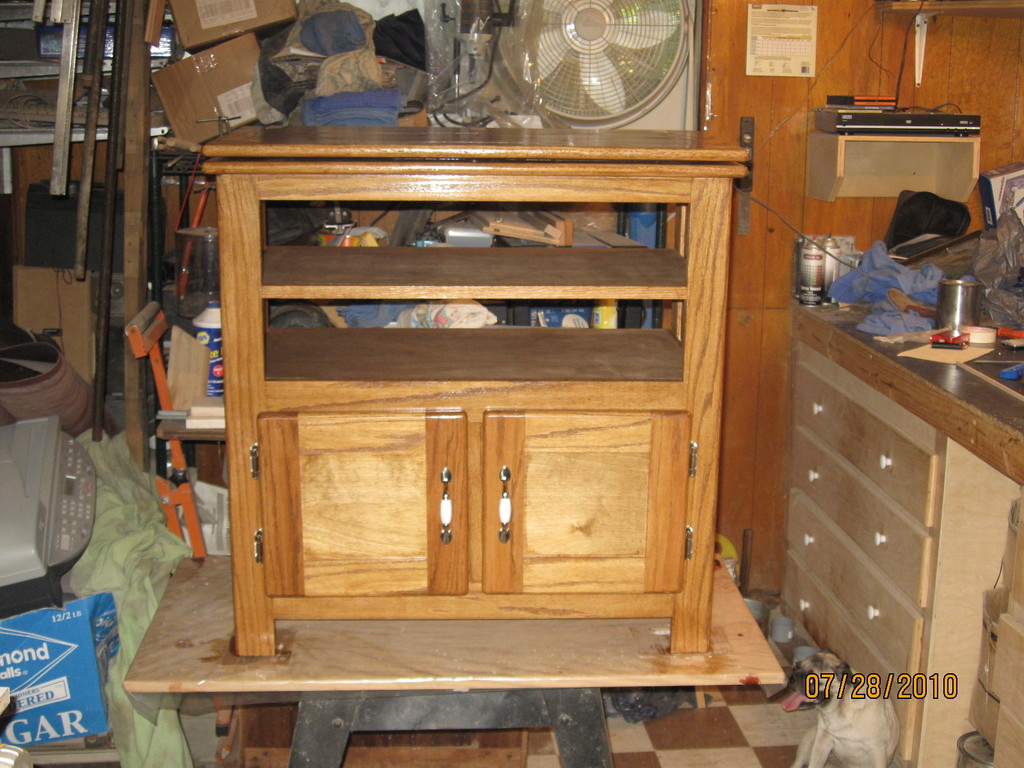 And thses are small door's.

Yeah, I'd say four years on 36x18 oak doors is a good indication that they aren't going to move or loosen up.  Haven't seen anything from James in a while -- last thing I saw was that rocking horse.  Thanks, I'm a dedicated beginner.

For the door joinery, I think as long as the rail and stile joints look tight from the front and will last a long time, then whatever someone prefers works.  I stay with routed cope and stick doors because I've found it's really difficult to get a consistent profile on the panel side of the rails and stiles using any other method.  It's no problem if you're doing shaker style doors without much profile on the inside edges -- you can ease a chamfer on those edges with a block plane and a sanding block.  But to do it with a router before assembly requires perfectly-executed stopped cuts on the router.  To do it afterward requires you to assemble the door without the panel, rout your profile around the inside of the frame, then take it apart again to insert the panel.  The other thing I don't like about this is it makes the inside corners round since the router bit's bearing won't allow for a true 90-degree corner.  So you have to handcut your profile in the corners to get them square.  It's possible, these doors on my shoe cabinet have a 45 chamfer on the panel side of the rails and stiles -- I did that at the router table with stopped cuts before assembly, but it was TOUCHY -- had to sneak up on the cuts, which took a lot more time than I like to spend usually. 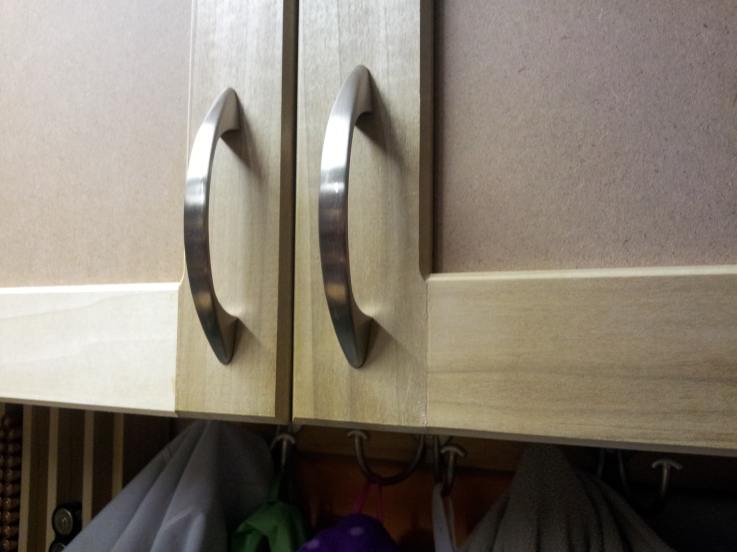 But you can see they are still slightly rounded at the joint.

These doors below were cut in a single pass on the router table with the specialized raised panel door bit set that cuts the grooves, inside profile, and stub tenons.  The rails get a couple passes with a bit that cuts the stub tenons and coped sides of the joints, then all four pieces get a single pass with a complimentary bit that cuts the grooves and inside profiles.  This set has a nice ogee profile on the inside that you just can't get with another method of joinery and without spending a lot of time fussing with the inside corners.  The coped joints give you nice, sharp 90-degree corners without any fuss.   It takes me about 15 minutes to go from rough stock to glue-up using this method.  The setup time on the different bits is the biggest factor.  I think it took me 45 minutes to get all three of these doors cut, glued, and clamped. 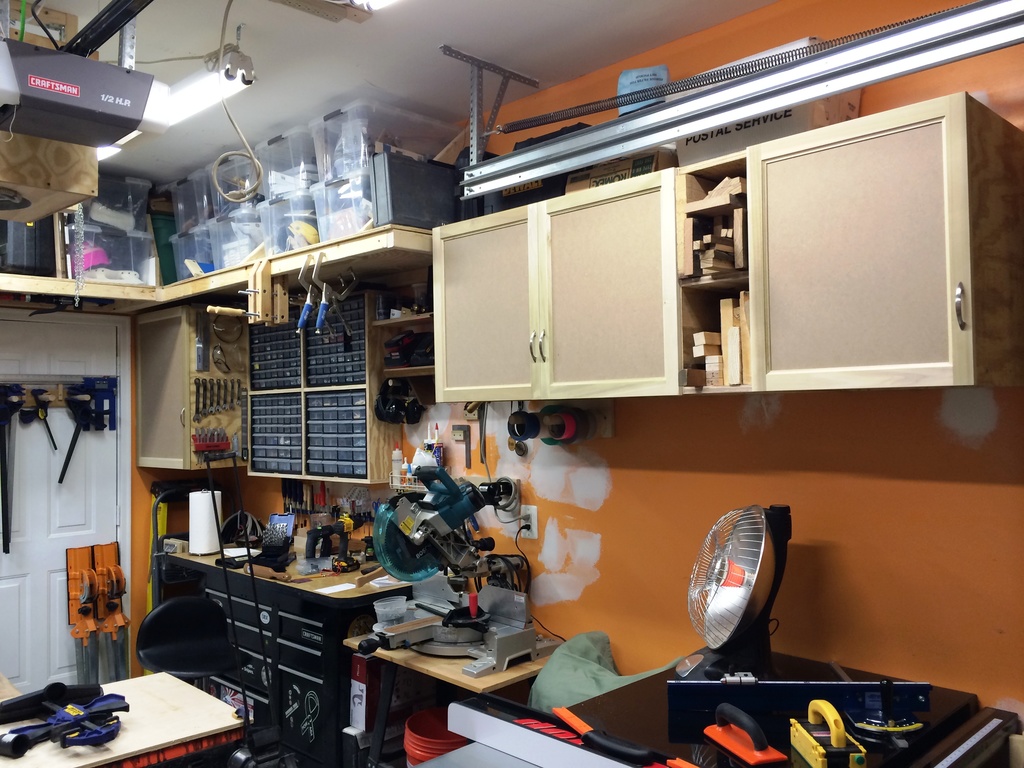 Looks like you're "dialed-in", using the Kreg Pocket Hole Joinery for your doors.

Thanks guys and Russ love the cabinets.Folks if you got the money get the nice router and the cabinet bits but if you dont have the money you still got your Kregjig.

Thanks, David!  Compliments from you always mean a lot to me - because like I said, you're a badass, man, and I really dig your stuff.  You're right though, those bit sets are muy expensivo.  I picked 'em up over a span of years when they would get discontinued and everyone would put them on clearance.  When they get dull, I sharpen them because I'd rather spend the money on wood and glue ya know?

I've done it both ways with pocket screws and T&G. I use my router to cut a 1/4 inch dado, throw in my panel and screw that sucker with some glue between the stile and rails. Hasn't affected the bite and it's still strong. However, I did have the occasional chipping because sometimes I get excited and crank the screw too hard (my own fault). My preferred method is to use T&G or rail and style bits and glue the joints now. Just a personal preference.