Hi all
Just bought my master system jig in mid December and have just made the workbench from the website. I have been reading through the forums for advice as Im new to woodworking and my tools only include a kreg jig, a circular saw and a drill. What other tools do I need?
I was thinking of buying an electric sander and a router. I watched a good dvd about routers and think that it would make all the difference to the finishing touches of a project.
Im going to try make a cabinet for a dart board next. After reading on the forum about SketchUp I tried to make a model of the design which I will attach. Is there anyway of getting a cutting list or parts list from this model?
Any advice would be much appreciated

Permalink Reply by Marc Hintzman on January 10, 2010 at 5:55pm
As for the necessary tools. I would get a router 1st then a random orbital sander. Unless you are into some large complicated projects you can do most projects with the few tools you have. If you get into it then invest in a table saw, but you can get along fine without it for a while. Good luck.

Permalink Reply by Steve McCullough on January 11, 2010 at 12:29pm
Welcome to the world of woodworking. In 1971 I bought my first circular saw, and over the years I have added many tools, lost some, gave some away, etc. Stuff Happens. BUT, remember this: "A man cannot have too many cordless drills". There are gimmick tools, and standard useful tools, but the tool world is evolving with new technology every day.
I work with wood as a hobby. I used to screen print shirts as a hobby, then a hobby business, then a full blown business so then I had to get a new hobby. Welcome aboard.

Permalink Reply by Don Grubish on January 12, 2010 at 8:02am
When I started out, all I had was a DeWalt cordless drill, a Dremel, and a DeWalt circular saw. After I bought my Kreg Jig, I picked up a Craftsman mitre saw, got myself a table saw, Delta drill press, two power sanders, a finishing nailer and compressor, and a Bosch jig saw. My dad donated a scroll saw and router, and my brother's friend upgraded my table saw to a much nicer one for free.

As for hand tools, I picked up clamps immediately, then got Minwax Wood Filler, wood putty, stains, Minwax finish, brushes, latex-free rubber gloves, I also got a square, a good tape measure, 90 degree clamps, and built myself a workbench.

My point of listing all these things is that you are just starting out on your road to woodworking. You may think you have all that you need, but you will eventually see that you can always use another tool later on, be it powered or hand. Use craigslist if at all possible. It will save you so much money in the long run.

Permalink Reply by John Harris on January 12, 2010 at 2:40pm
If money is an issue (and it always is) make craigslist.com your new friend. I have purchased some great tools over the years at a fraction of their original cost.

Try this link and see if this cutlist plugin for SU will help you.

Permalink Reply by David Roberts on January 13, 2010 at 12:28am
Sounds like a lot of tools to buy. I've looked into craigslist alot for some tools, also amazon has some killer deals sometimes. i bought a 2 base router brand new for half price. what's also nice is that amazon has reviews so you can take some of the guess work out of figuring out whether a tool is good or bad. my last tidbit is that usually with each project, you discover which tools you actually need so don't feel like you have to buy all this at once. have fun.

actually, one more tidbit. i find that lowes will cut sheet goods into manageable sizes so don't feel like you need to run out and buy a super expensive table saw.

Permalink Reply by Tim T on January 13, 2010 at 10:48am
Thanks all for the welcome into the world of woodworking, all sounds a bit daunting with the amount of tools you could buy. Lots of room to go wrong for a beginner-lets hope not though!!
Money is of course going to be an issue-I live in Ireland so amazon wont post tools and my Kreg cost me 150 euro here which is about $200, 500 screws cost 18 euro ($25) a 8' x 4' x 3/4" sheet of mdf cost 20 euro ($27) so its easy to overspend. I still expect to get value out of my Kreg as wages are also higher so hiring a carpenter is easily beaten. Will try local 2nd hand sites for better value tools.
Sketch up is working out great but the cutting list plugin just didnt work for me-can easily figure it out with a pen and paper though. One other thing is getting your design from sketch up and just knowing what wood to use and as I will be doing mostly everything on the Kreg how to design it in a Kreg friendly way. Will attach an office desk I was thinking of making and how I was thinking of making it.
Looking forward to hearing what ye think of it 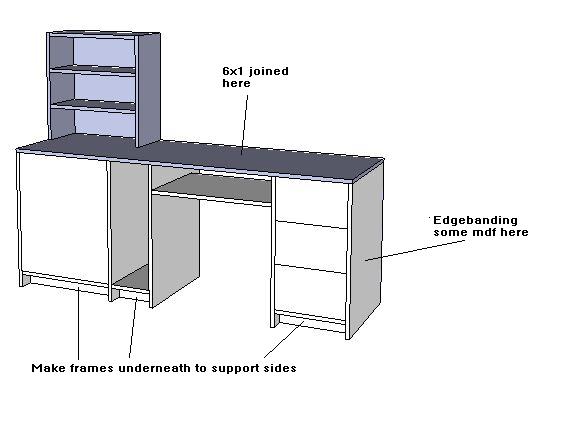 Permalink Reply by Matthew Purtill on January 20, 2010 at 6:50pm
Tim,
Somebody down below mentioned Amazon.com. I few years ago, I was looking for a miter saw. I found a real nice 10-inch Bosch slider on Amazon. I used it for some outdoor projects. I could cut three 4x4s at once. The cheapest price I found it for was on Ebay at $454. However, Amazon had a tools sale. It usually occurs in January or February. This saw was listed at $389 on Amazon. But if you spent over $300, you got $50 plus free shipping. Amazon also threw in a nice Dewalt reciprocating saw and 10 blades for free. If you spent over $500, you got a $100 off and $150 off at $750. There were other deals where they threw in a hanging shop vac and some others. But this saw was what I wanted. I suggest you look out there now and over the next few weeks. You may see some great deals. Best of luck!

Permalink Reply by Jenny on January 20, 2010 at 8:49pm
Tim, I normally work in the States where we can get anything, 24 hrs a day, relatively cheap, but I feel for you on the Ireland problem. I did a minor remodel on a house in Co. Kerry. Tools were hard to find and ridiculously expensive. The shop in town wanted 35 euro for a tape measure! That changes your tool list a lot.

I would start with clamps if you can find them. (The Kreg right angle one helps a lot, and a face clamp).

Oddly I found Dewalt cordless drills are not that much more expensive in Ireland than in the states. (And from experience - don’t get one from the states, the charger base will not work in Ireland even with a converter). A compound miter saw would make that dartboard cut list a lot easier... tools are an addiction.
Tim T said:

...Money is of course going to be an issue-I live in Ireland...

Think it is a real good guide of tools to buy.
Will also be getting myself a right angle clamp.
Have also found out stockists for all types of wood while ringing a man about a 2nd hand router so things are looking up!!!

Permalink Reply by Chuck Decker on January 28, 2010 at 7:06pm
This is my first contribution to the group. I have been collecting tools for 55 years now. I have more tools than I can think of. Besides the Kreg, the ones that are most important to me are the:

Tim,
Somebody down below mentioned Amazon.com. I few years ago, I was looking for a miter saw. I found a real nice 10-inch Bosch slider on Amazon. I used it for some outdoor projects. I could cut three 4x4s at once. The cheapest price I found it for was on Ebay at $454. However, Amazon had a tools sale. It usually occurs in January or February. This saw was listed at $389 on Amazon. But if you spent over $300, you got $50 plus free shipping. Amazon also threw in a nice Dewalt reciprocating saw and 10 blades for free. If you spent over $500, you got a $100 off and $150 off at $750. There were other deals where they threw in a hanging shop vac and some others. But this saw was what I wanted. I suggest you look out there now and over the next few weeks. You may see some great deals. Best of luck!

Permalink Reply by Henry Parslow on January 28, 2010 at 7:24pm
Drop a lot of hints around Christmas time and your Birthday.

Has anyone used one of the Kreg Universal Stand configurations as the base for a miter saw workstation with fold down wings?  I scrolled through the pics in the community and all I saw were using a DIY base cabinet.  I have an extra Kreg router…Continue

Started by Bill Murphy in Other Kreg® Products Jun 6.

Hi all I am kind of new to the forum. Though I have been a kreg owner for more years than I can recall. As a CSS  (Complete Set Syndrome) sufferer I have obvious;ly got one of everything kreg make ( in my price bracket). LOL.  after years of waiting…Continue

Started by John Hoskison in General Woodworking May 27.