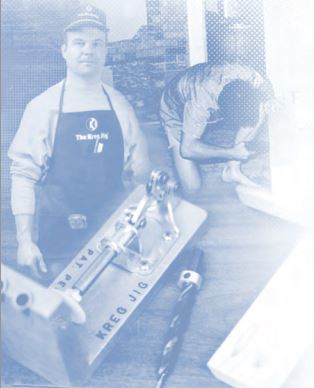 Craig Sommerfeld discovered his passion for working with his hands in a high school shop class. After graduating, he turned that interest into a career. From 1976 to 1990, he worked third shift as a tool-and-die maker for Bourns, Inc., a manufacturer of electronic components, in Ames, Iowa. There, after hours and during breaks, he worked to find a way to build kitchen cabinets with hidden joints.

He drew inspiration from the pocket-hole joints used under dining tables and other furniture pieces. The problem: Manufacturers had specialized, expensive equipment for making the joints. Craig needed an easy and efficient solution. So he created plans for a single-hole jig and built the shortcut device himself. It was a success: The jig easily enabled Craig to hide the holes.

Craig showed his creation to his brother Marc, a high school shop teacher and cabinetmaker. At first, Marc was a bit skeptical. In fact, it took Craig two years to convince Marc to try using the tool. Once he did, Marc saw that Craig's jig offered convenience without sacrificing quality.

Knowing other woodworkers could benefit from the tool, Marc talked his brother into taking it on the road. In 1989, the two ventured to the Minneapolis Woodworking Show—their first real success. They sold all the jigs they’d brought and took orders for 20 more. The brothers continued to attend trade shows each weekend to sell the jigs Craig and his son Todd built during the week in a backyard woodshop.

When Craig's employer closed its doors and moved operations overseas, a new opportunity presented itself: Craig could now sell the jig full-time. After taking a leap of faith, the metalworker made waves in the woodworking industry. Craig’s jig became the Kreg Pocket-Hole Jig®, and Kreg Tool has grown from a home business to an international enterprise in just 25 years.

Yesterday, I received an email wanting my opinion on Kreg adding high end workbenches to their product line and wanted to know before I clicked the link if this is a legitimate survey or some phishing scam. Here's the link I was provided (…Continue

Recently purchased two 96" tall pantry cabinets that are 23" deep that only came with two adjustable shelves and two fixed, (one at about 55" and one at the very bottom).  Shelf holes in the walls are drilled 2" O.C.  Like most store-bought…Continue